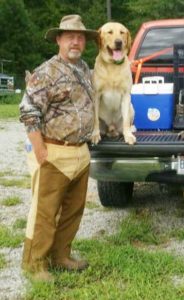 Born in Columbus, OH on January 30, 1955, and raised in Smithfield, VA, he was the son of the late Leo Joseph and Ilean Sargent Adolph. Retired from the Cabinet Shop of Norfolk Naval Shipyard, he was an avid outdoorsman and enjoyed hunting and fishing. A beloved husband, father, grandpa, and friend, he dearly loved his family and cherished the times spent together. A veteran, he had served in the US Army.

In addition to his parents, he was preceded in death by a sister, Lucille Fordice.

A celebration of his life will be held Saturday, May 25 at 11:00 a.m. at the residence, and will be conducted by the Revs. Tom Hall and Gary Saffell. Casual attire is encouraged.

Memorial contributions may be made to Beulah Baptist Church, PO Box 101, Sunbury, NC 27979, or to a charity of one’s choice.