WINTON – The RC Wildlife Club welcomed everyone to their annual youth catch day event for kids ages 15 and under on May 4.

The club provided poles and bait. The “yougins” put these to task for the tournament, which started at 10 am and lasted until the final weigh-in at noon. 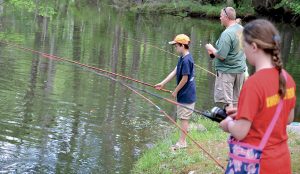 The Roanoke-Chowan Wildlife Club opened its facility along the banks of the historic Hare’s Millpond to local youngsters and adults on May 4 for the annual “Catch Day” event. Photo by Danny Bowman Jr.

Jeff Turner, a Merchants Mill Pond State Park Ranger, brought canoes for young and old alike to enjoy. Turner made sure all participants were fitted with life jackets. Beginners were given a quick lesson in paddling technique. Of course people and canoes not going where they wanted them to go resulted in more than a few fender benders. Laughter and much banter among the   canoeists could be heard.

Some took their fishing gear along in hopes of getting the trophy fish. Others fished from the piers or along the banks. Some were seen fishing beside the millhouse.

All of the canoeing and the fierce competition of trying to catch a fish whipped up huge appetites. The kids were treated to free hot dogs, chips and drinks. BBQ plates were also offered for an $8 donation.

Trophies along with rods and reels for largest fish went to Emma Jones (1 lb. 4 1/2 oz.) and to Carter Hudgins (2 lbs. 2 5/8 oz.). Trophy for overall largest fish also went to Hudgins.

Richard Bland, club president thanked everyone for attending the event, and felt blessed that the millpond was still intact and open for enjoyment after previous damage from hurricanes.

Hall Ruritan Club in Gates Couty helped the RC Wildlife Club get back on track by raising funds to repair the storm damage with a spring and fall Brunswick stew and BBQ sale. Bland stressed that the Wildlife Club wouldn’t have been able to have and put together 600 one-pound and one-quart containers of BBQ and stew containers without the use of the Hall Ruritan Club facility and their assistance.

Funds raised from that event helped to repair the dam, for tin to replace the club house roof, and repair, prime and paint the millhouse.

An anonymous donation allowed the club to repair and replace the millhouse’s flood gates and seals.

Answered prayers, members, volunteers, hard work and successful fundraisers have got the club up and running again.

Two of the club’s missions are to have a spring Fish Day and a Fall Hunting and Fish Day. State agencies and various other clubs participate to educate and introduce our youngsters to North Carolina’s immense diversity of natural resources and wildlife.

“Thank you to everyone for everything. We appreciate the community for its participation. We are looking forward to this Fall’s event and seeing everyone again for a fun-filled day,” Bland concluded.

Holding the line, for now