WINDSOR – “It’s as if he was pushing me, because he was always in my head,” said former Bertie High football player Chris Cooper of the late Barry McGlone.

McGlone, the former educator and coach, worked out Cooper almost daily during the summers prior to McGlone’s untimely death in 2018. It was a regimen of running, weight-lifting, and calisthenics; breathlessly chugging up short inclines in hot weather around Kelford.

“He saw a lot of potential in me, and maybe that’s what awakened it,” the soft-spoken Cooper recalls. 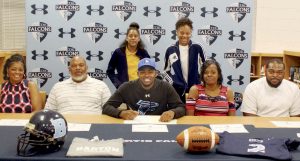 Last week, Cooper signed his National Letter of Intent to attend Barton College beginning this fall. He will have a full year to prepare for college football as the Bulldogs will not compete competitively until 2020.

Barton is re-starting the program which had been dormant on the gridiron in Wilson since 1950 when the school was known as Atlantic Christian College.

Cooper leaves Bertie holding several honors, including being the team’s leading rusher as a senior with 1,306 yards (an average of 118.7 yards per game). He scored 13 touchdowns during his final campaign – 10 on the ground and one on defense. He also ripped off a memorable 60 yard scamper in Bertie’s Homecoming win over First Flight.

“He’s very quiet, doesn’t talk a lot,” said Bertie football coach Grantley Mizelle. “Barton’s not only getting a heckuva football player, but his grades are outstanding; so no matter whether he chooses to play football or not he has some other alternatives. They’re getting a great kid and I’m honored to have been one of his coaches.”

Cooper says waiting an extra year before the team’s first kickoff will produce some anxious moments whenever he watches the game, but it will also give him needed time to work on other aspects of his total football persona.

“That’ll be the time for me to become a better player, put on a little weight,” he says in a voice barely above a whisper.

Cooper, who says he also had an offer from NC Wesleyan, plans to be a business major in college. He also admits the aesthetic beauty of the city of Wilson – known as the ‘City of Trees’ – helped sell him on the program.

“It liked it just for the atmosphere, and the area of where Barton was located,” he details. “Because they’re starting a new program also gives me a chance to start records.”

Cooper says coaches have indicated he will be playing on offense in the beginning, and in the spread formation, which is what he’s used to from high school. He wants to be a team player doing whatever it takes to help the team win. That next naturally prompts one to say, even at the Division-2 level, that he has to put on more weight.

“I don’t want to get too muscular,” he remarked. “Coming from Bertie, this is a place that has probably more heart than anybody. You have to grind for everything here, and that’s one of the things I like most about this team.”

Cooper also cites faith and family as motivating factors in what he hopes he will accomplish in college.

“Everything starts with God,” he acknowledges.

In five years, after college is completed, Cooper hopes he’ll be a successful businessman, and a family man who will do a lot of traveling.

“To get there, I’ll have to sacrifice, work harder than anybody else, and do whatever it takes to get to and stay on top,” he said.