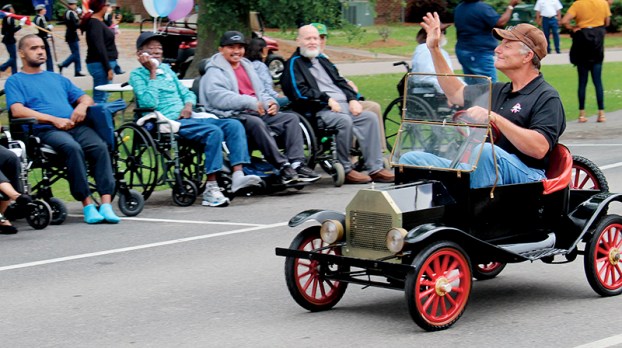 Everyone loves a parade

AHOSKIE – Cloudy skies loomed overhead, but the threat of rain didn’t dim the spirits of residents and staff at Accordius Health at Creekside Care.

The Ahoskie facility kicked off their annual celebration of National Skilled Nursing Care Center Week on Monday, May 13 with a parade. Several local community members came out to participate in the event.

“We want to thank you all for being here today. This is the biggest week of our year,” said Creekside Recreation Director Carolyn Pierce as she addressed the crowd of residents resting in chairs on the front lawn. “We want you to know you’re loved by the community of Ahoskie and Hertford County, so I want you to enjoy this parade.”

Once the festivities got started, residents clapped and waved for the parade participants as they passed by. They were dazzled by a variety of antique tractors, Disney characters, horses, the Pig from Piggly Wiggly, a Chowanoke Native American dancer, police vehicles, fire trucks, and much more.

At the conclusion of the procession, a short presentation was held featuring several individuals who spoke about community support of the nursing home facility.

“This is really an amazing effort that you all have put on,” said Ahoskie Chamber of Commerce Director Amy Braswell.

Creekside Administrator Lori Imler thanked everyone who had participated in the parade, noting it would not be complete without members of the community lending their support.

Brett Gales, Accordius’ Vice President of Marketing and Business Development, spoke briefly to recognize the staff’s work to bring everyone together.

“Making a nursing home work well and making it a fun place for people is a tough job, and it takes a special group to do that,” he said.

The celebration event wrapped up with a musical performance by the One Accord Choir, which is made up of several Creekside department heads, and then a “wheelchair line dance” performance by participants in the facility’s physical therapy and rehabilitation program. They had practiced every Friday for several months to learn the dance moves.

A sudden rain shower cut short the planned balloon lift-off to conclude the event. Residents and staff made their way back inside, and members of the Ahoskie Women’s Club, who prepared hamburgers to provide for lunch, scrambled to safely bring the food inside. But despite the abrupt end to the outdoor event, the celebration was a success.

“This week is all about ‘living soulfully’,” Pierce said afterwards, explaining that was the nationwide theme to focus on this year.

The Accordius facility also hosted other events throughout the week to connect the community with the residents. Kids Fun Day was held on Tuesday, May 14 and the Soulful Music Extravaganza, featuring several local talents, was held on Thursday, May 16. Pierce said residents love to invite their families to come visit during these occasions so they can share in the fun together.

“The community has been amazing,” Pierce explained. “They’re a huge part of this week, and they make the residents feel like they’re still part of the community and loved. That’s so important to us.”

In addition to community events, Pierce said there were a number of special facility-only activities planned for the residents and staff to enjoy such as a cupcake walk and a Soul Train celebration. The whole week-long celebration is coordinated as a partnership between the facility’s recreation and maintenance teams. Pierce said they start planning about four months ahead each year.

“It’s fun and it’s worth every minute of it,” she concluded.

WINDSOR – After just 16 months on the job, Dr. Catherine Edmonds is leaving the superintendent’s post for Bertie County... read more