Edmonds was named to her new post after a unanimous vote by the ECPPS school board in Elizabeth City on Monday.

“I am overwhelmed with pride in what this administration has accomplished for the youth of Bertie County during my tenure,” said Edmonds in a brief statement. “Every day, we have remained focused on ‘Every Child. Every Day. Make Every Minute Count.’ We have given students, staff and the community a voice in the work of the school district.” 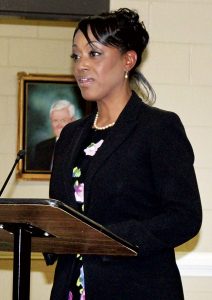 Edmonds has been the Bertie County Schools superintendent since February 2018. Before that she worked for the University of North Carolina System as director of educational leadership and development and as the state director of the N.C. Principal Fellows Program.

Edmonds received her Bachelor of Science degree in math education from N.C. A&T State University, and later both a master of administration and supervision degree and doctorate in educational leadership from N.C. State University.

She began her Bertie tenure in early 2018 with the “Listening Tours”, her way of engaging the community, students and staff and giving each one a voice by letting them know they had a stake in the work of the school district.

“I believe in all children having a quality education, and I have maintained high expectations for the staff and students of Bertie County Schools, because I value support and accountability,” she said.

Edmonds’ career in education has been known for one hallmark: improvement.

Among other career highlights: she has been instructional improvement officer for Guilford County Schools, later becoming District Transformation Coach with Team Lead and Halifax Lead for the N.C. Department of Public Instruction; leading the state district transformation team in Halifax County for five years. During Edmonds time at the helm of the program the number of low performing schools dropped from seven to two, high school proficiency moved from 40 percent to close to 70 percent, and the overall high school graduation rate increased 4.7 percent.

“I would like to thank the Board of Education for giving me the opportunity to serve the students and families of Bertie County Schools,” said Edmonds. “I am forever grateful for the parents, leaders, staff, community members, and Board members who came together to work on behalf of the students of Bertie County.”

When a June 30, 2016 audit revealed Bertie County Schools were in a financial mess to the tune of a $704,995 deficit in its General Fund balance, as well as facing some major issues in the way the school system handled its bank accounts, Edmonds worked to reduce the number of findings on the audit from nine to four, and in two years helped the district “totally overcome” a deficit reaching $1.4 million. According to the annual audit report in Jan. 2019, the school system is back in the black with approximately $710,760 in its General Fund Balance.

Edmonds also feels she brought back leadership opportunities for students and teachers. According to a release, the Student Government Association was reinstated; the first ever Junior School Board Members and Junior County Commissioners were sworn in; and Bertie County Schools was awarded the Advanced Teaching Roles grant from NC Department of Public Instruction, which is named ‘Bertie THRIVEs.’

“Bertie THRIVEs will be a game changer for Bertie County Schools,” Edmonds maintains. “I feel it will lead to improved teacher recruitment, development and retention, as well as develop and extend the reach of our most highly effective teacher leaders.”

“My aim in life—in all things—is to leave others better off than when I met them. It is my firm belief that I have done so here in Bertie County Schools. I will truly miss the students, my colleagues, all the staff and this entire community,” she concluded.

According to the Elizabeth City Daily Advance, the ECPPS contract with Edmonds runs from July 1, 2019, through June 30, 2022. The local supplement is $10,000, and based on the most recent salary schedule available from the state, her state salary would be $128,676. The contract also calls for a $25,000 local salary supplement, which will bring her total salary to $153,676.

The board’s contract with Edmonds also states the severance pay provided for termination without cause is “the aggregate salary and local supplement she would have earned under this agreement for a six-month period from the actual date of termination.” That’s less than what ECPPS paid Cartner under his contract upon his resignation.

Edmonds’ contract also requires her to relocate to Pasquotank County within 90 days, and to live there while she serves as superintendent. She will also be reimbursed for relocation expenses up to $5,000.

Her annual salary with Bertie Public Schools is listed at $134,000 plus the use of a vehicle owned by the school system.

Edmonds says she will work with district administrators in order to ease the transition for Bertie County students and staff. In the meantime, she will continue to diligently serve the students of Bertie County to finish out the current school year and to ensure that there is a smooth exchange of leadership.

Dudley said the school board will meet on Monday, May 20 at 5:30 p.m. to immediately begin the search for a new superintendent.

‘Don’t ever give up’