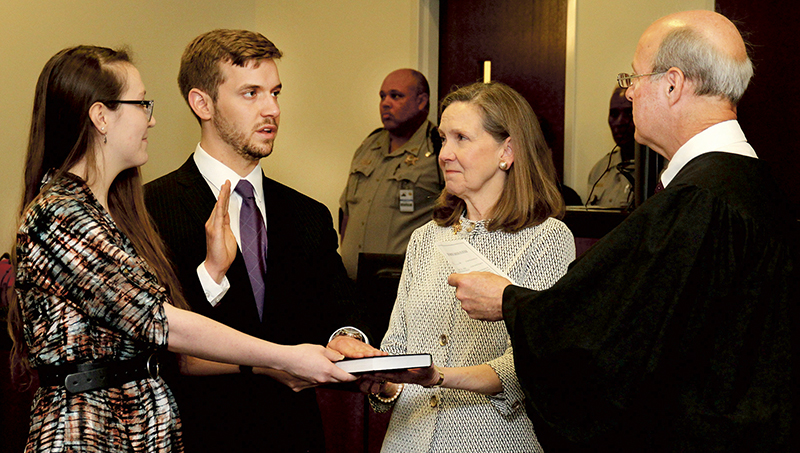 Ben Newbern (second from left) accepts the oath of office as a practicing attorney in North Carolina and as an Assistant District Attorney from his father, the Honorable Judge Thomas R.J. Newbern, on Tuesday in Hertford County District Court. Holding the Bible are Ben’s mother, Margaret, and his girlfriend, Kelley Gillen (left). Staff Photo by Cal Bryant

WINTON – If a mirror is indeed a reflection of one’s soul, then two individuals liked the images they witnessed here Tuesday morning in Hertford County District Court.

With family, friends, judicial officials and law enforcement officers looking on, Benjamin “Ben” Hines Newbern was sworn in as a practicing attorney for the North Carolina Bar Association and then accepted the oath of office as an Assistant District Attorney (ADA) for Judicial District 7.

For Judge Newbern, watching his 26-year-old son launch a judicial career was a proud and reflective moment. He once stood in the identical position over 30 years ago when he was sworn in as an ADA for then District 6B Attorney David Beard.

“I have had the opportunity during my years on the bench to swear in a number of individuals to various positions,” said Judge Newbern, who officially retired in 2012, but has since returned to serve the State of North Carolina as an emergency District Court Judge. “This one, of course, is very special to me.”

Judge Newbern, who was the local area’s Chief District Court Judge at the time of his retirement, added that the duty he proudly carried out on Tuesday to swear in his son signaled the closure of a circle in his life.

“Life is circular,” he stressed. “To have Ben come into the same position that I started in helps bring the two ends of that circle closer together.

“Ben, this is about you today, but it’s also about that man sitting up there on the bench (Judge Newbern) and that woman sitting over there,” Asbell said, the latter reference to his mother, Margaret Newbern. “This is about what they’ve done for you over the years to get you to this stage of your young life today. I have a lot of love and respect for your parents; your dad swore me in 26 years ago as an ADA.”

Asbell briefly outlined Ben Newbern’s life up until this point, saying he graduated in 2018 in the top 10 of his class at the Elon University School of Law. Before that, he earned a BS Degree in Psychology in 2015 from the College of Charleston.

“I’ve watched you grow up into a young man of impeccable character,” Asbell noted. “We were fortunate enough to have Ben serve as an intern for our office two summers ago. Last year he returned to our office where he worked under the Third Year Practice Rule and did an amazing job. We are so excited now to have Ben with us full time.”

“I’ve served on the bench in a number of districts in our state, and to have Ben to learn from Mrs. Asbell and her capable staff is a big plus in his life,” Judge Newbern said. “You guys are as good as it gets and I’m so happy that Ben will have the opportunity to learn from you.”