CONWAY – On April 21, one family from Conway Baptist Church had an exceptional double reason to rejoice.

In mid-February, Cody Martin, the 10-year-old son of Ken and Lisa Martin, made a profession of faith and his baptism was scheduled for Easter morning. About 20 of his extended family members were among those in attendance on Easter Sunday to witness this special observance at the beginning of the worship service. 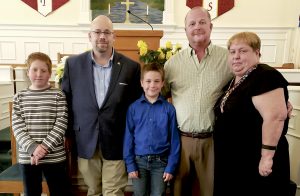 Rev. Jayson Rowe had been counseling Cody along with his 12-year-old brother, Dustin, during the weeks preceding the baptism. Pastor Rowe had been promoting the “Who’s Your One” Campaign headed up by Johnny Hunt, senior vice president of evangelism and leadership at the North American Mission Board, and J.D. Greear, pastor of Summit Church and president of the Southern Baptist Convention. Pastor Rowe had chosen Dustin as his “One” and prayed that he would make the same decision to accept Christ.

God answered those prayers three weeks prior to Easter in the pastor’s study when Dustin made this major decision to accept Christ. However, perhaps from both a little shyness, and respect for his brother’s special day, Dustin struggled with when to make the decision to come forward and make his profession public by requesting baptism.

During the invitation call after the Easter sermon, Dustin courageously came forward. Conway Baptist gladly voted for acceptance. With the baptismal pool still filled and family members present, Dustin was immediately baptized at the end of the service that Sunday followed by the observance of the Lord’s Supper.

It was a first for Conway Baptist to have the baptisms of two brothers to begin and end a service, and it was an unforgettable day for the parents and relatives of these two boys as they begin their new journey with Christ.