BELHAVEN – A Boone Barkley single up the middle in the bottom of the fourth inning broke a 1-1 tie and helped propel Ridgecroft School to a 12-2 win and claim the Tarheel Independent Conference baseball tournament.

Caleb Porter scored on a Treyce Myers sacrifice fly for the Rams’ first run in the bottom of the second inning, but in the top of the third, the host Raiders tied it. 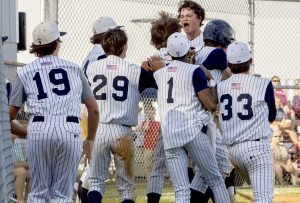 Ridgecroft’s Luther Glover steals home on the final play of the game, erupting in a wild celebration for his team. A.A. Imaging / Andre Alfred

Ridgecroft pulled away for good with five runs in the fourth inning. After Barkley’s go-ahead RBI, Porter tripled on the first pitch of his at bat, scoring one run, Jack Jones singled on a 3-1 count, scoring another, and Bryce Stevens’ RBI plated a couple more. The Rams led 6-1, then put up two more in the fifth and sealed it up with four in the sixth inning.

Stevens got the win on the mound for Ridgecroft. He surrendered two runs on eight hits over five innings, striking out four and walking one.

The Rams racked up 16 hits. Jones, Luther Glover, and Porter all had three hits each.  Barkley, Cody Peterson, and Stevens had two hits apiece, while Zeb Askew had the last Ridgecroft safety. The Rams made no errors; Peterson had the most chances with five. Three Rams stole at least two bases; Jones leading the way with four.

In the softball championship contest, Lawrence Academy struggled to put runs on the board as Pungo – the host team and third-seed – shocked the defending champs in an 11-1 rout.

The Lady Raiders scored six runs in the first inning and never looked back from there. Emily Spencer, Ashley Spencer, and Parker Williams all drove in runs in the frame. Pungo got two more in the second inning and their final three in the fourth, ending the contest in five innings. Lawrence’s lone run came on a Rebekah Goodwin RBI single that scored Claire Dail in the third.

Reagan Stoop got the win, allowing six hits and one run over five innings.

Isabella Conigliaro lasted just one and one-third innings in the loss, allowing six hits and eight runs while striking out one. Hailey Barnes threw three and two-thirds innings in relief out of the bullpen.

Dail led the Lady Warriors with two hits in two at bats. Lauren Smith, Morgan and Megan Stotesberry, and Goodwin had the other solo hits for LAW (13-5); and now await their seeding in the upcoming NCISAA state tournament.

LASKER – For a team that had won just three baseball games all season, any positive incentive would be cause... read more