AHOSKIE – The G-Men now have an X-man.

Former Hertford County High and Old Dominion University football player Oshane Ximines made history Friday night; the ex-Bear became the highest Ahoskie native taken in the NFL Draft when he was selected in the third round, 95th pick overall, by the New York Giants.

Ximines breathlessly received the news at his apartment in Suffolk, VA with a call from Giants coach Pat Shurmur, according to the Giants’ NFL website. 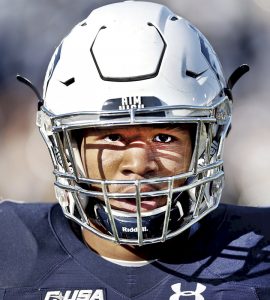 Screams of celebration could be heard as Shurmur tried to deliver the news.

Finally, above the din, Ximines responded; the relief of the moment quelled by the rush of adrenaline.

“Honestly, this is the best feeling I have ever had in my entire life,” he later said in a teleconference that night.

Ximines is also the first ODU player ever drafted, and the highest Ahoskie native ever selected. Sam Harrell (11th round) and Timmy Newsome (6th round), both who played at the old Ahoskie High School, were each selected in the 1980 draft.

“I’m still speechless, because it’s hard to find the right words,” Ximines said on Tuesday afternoon during a telephone interview with the R-C News-Herald. “A fellow from Ahoskie making it to the NFL still feels like a dream, but it represents a lot of hard work. I mean, what kid who plays football doesn’t grow up with these kinds of dreams? This goes to show that anything is possible.”

When asked what advice he would give to up-and-coming football players who have aspirations to play at the highest level, Ximines was quick to answer.

“Don’t stop dreaming, and don’t sell yourself short, because anything is possible; whether its football or anything you plan for your life, don’t count yourself out. Put your best foot forward and dream big,” he stressed.

A “Two-Star” recruit out of Hertford County High, Ximines was brought up from the Bears junior varsity as a 10th-grader and started the final game of his sophomore year, a playoff game against Havelock.

Career-wise in high school he had nine total fumble recoveries, five as a junior including one for a 36-yard touchdown in the Bertie game; he also had four recoveries as a senior, but no interceptions. Ximines recorded 65 tackles and 14 sacks as a junior, finishing his prep career with 35 career sacks, including six in one game as a senior. He also finished with 145 total tackles, and was a two-time team Defensive MVP and two-time All-Northeastern Coastal Conference selection.

“He’s the only player I’ve ever coached who was drafted,” said former Bears head coach Scott Privott, who directed the team during Ximines’ playing days (2011-2013).

“They felt he was going (to get picked) on the second day, but they couldn’t say which round,” Privott recounts. “I had a feeling if he didn’t go first round that’s where he’d be.”

“He had exceptional work habits, he led our drills and was usually the first one finished.” Privott noted. “If he stays healthy, the sky’s the limit on his (pro) career.

“He was polished; he was really, really good,” Hodges recalled. “You didn’t run at him, you stayed away from him. You didn’t realize he was out there because he wasn’t flashy; but by the end of the game he had a dozen tackles and four sacks. He was just a guy who got the job done.”

“He didn’t have penalties, he just got the job done and did it the right way,” Hodges said.

Recruited by East Carolina, Ximines chose the Monarchs over the Pirates and went on to make his mark in Tidewater.

He closed out his college career making his mark as a Monarch, setting ODU records as best in sacks with 33, tackles for loss with 50.5, forced fumbles with 11 and QB hurries with 33. He also ranks ninth in school history with 12 pass breakups.

In 2018, his senior year, Ximines finished fifth in Football Bowl Series (FBS) with 12 sacks and was 15th in FBS with 18.5 tackles for loss. His 58 tackles were the 10th most by an FBS defensive linemen. Ximines was a two-time first-team All-Conference USA honoree, earning second-team honors as a sophomore and all-freshman honors in 2015.

Ximines became the first Monarch, along with ODU teammate Travis Fulgham, to play in the Reese’s Senior Bowl. The pair were also the first ODU teammates to participate at the NFL Combine, and he also competed in the State Farm All-Star Football Challenge, running in the obstacle course.

“We are so very proud of our first ever draft choice at Old Dominion University. Oshane deserves the opportunity to play in the NFL through hard work and dedication to his craft,” ODU Head Coach Bobby Wilder said. “He improved every year, has a tremendous work ethic, and is a great teammate. The Giants will be pleased with the overall value he brings to their organization.”

“I plan on running and lifting weights because I want to report in as good a shape as possible,” he said. There’s a lot I need to take in, and I can’t wait to get out there and start learning.”

Returning to New York City will serve as a homecoming for the NFL rookie.

“New York’s where it all started for me,” said the native of the “Big Apple, “but I grew up in Ahoskie. I still have a lot of family here and it will be good for them to come see me play.”

When asked if he could be better than Giants defensive legend Lawrence Taylor, Ximines closed by saying, “It would be awesome if I did. But I’m just ready to get up there and start my career doing whatever I can do to help this team win.”

MURFREESBORO – A nearly 70-year-old bottle of champagne rests on a shelf in Colonial Pharmacy. But it’s not for sale.... read more