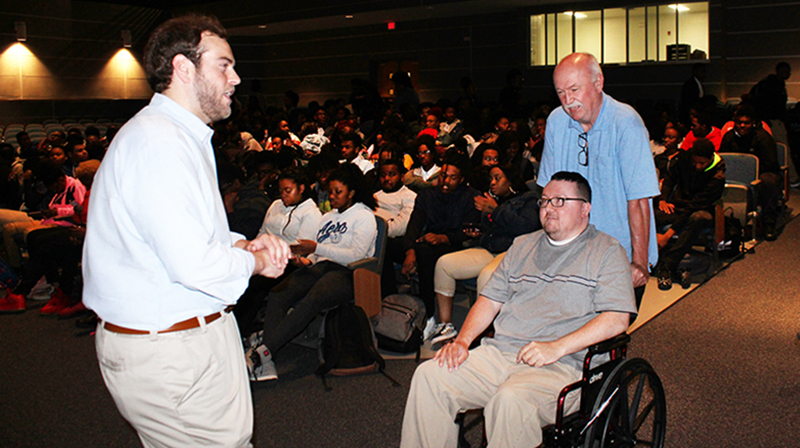 WINDSOR – After a one-year hiatus, the Alcohol Education program is back in Bertie County Schools, another initiative of Superintendent Catherine Edmonds.

Not only is April Alcohol Awareness Month as proclaimed by Governor Roy Cooper, but with Prom Night looming for many senior high schools this upcoming weekend, the return of alcohol education couldn’t be timelier.

Monday, Bertie High School and Bertie Early College High School students had a special assembly on the dangers of drinking and driving by the Initiative to Reduce Underage Drinking, which is sponsored by the Department of Motor Vehicles and the local ABC Board. 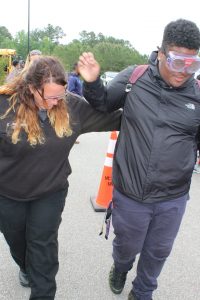 “We invited the Breath-Alcohol-Testing mobile unit bus – or, BATmobile – along with Bertie Emergency Services, the NC Highway Patrol, and speakers,” said ABC Board member Clint Freeman. “We wanted this year’s education program to be more community-based.”

Guest speaker for the event was Lenoir native Cameron Houser. Houser was involved in a vicious automobile accident in his Caldwell County hometown back in 1999. One night leaving a local pub with a friend, the pair was involved in a serious high speed crash that left him with serious brain damage. After over a year of painful recovery, including three months he spent in a coma – re-learning to walk and speak – he now travels the state with the TalkItOutNC.org arm of the state ABC Commission lecturing on the consequences of drinking and driving.

“I was born with good health and physical ability and I had everything I needed to be happy, and I aspired to play Major League Baseball,” Houser stated. “After the accident, I could just ask myself the unanswerable question or just go on with my life and help other people not to go through the same things I’ve been through.”

Cameron lectures on the consequences of one’s actions if they choose to drink and drive, and is glad to make his tale of redemption and recovery part of a mission.

“I tell my story because if I can help one young person in finding the right path, then I have lived up to my full potential as a human being,” he acknowledges.

After the lecture, Bertie EMS workers allowed students to try on alcohol impairment goggles, used to simulate a state of drunkenness.

Unlike some tests that are administered with vehicular assistance – usually with a golf cart – Monday’s test involved dexterity and coordination that one must execute while walking during a test for alcohol consumption.

“We want you to think about the consequences of some of the things you’re going to want to do during a season of celebration,” said EMS coordinator Crystal Freeman. “The Fatal Vision goggles demonstrate how alcohol affects their brains. Hopefully, they’ll think twice before they take any type of drug or consume any type of alcohol that might impair their judgment and thought process.”

The morning ended with a tour of the BATmobile, a fully equipped RV that officers can use to write and file citations as well as conduct breathalyzer tests. The mobile unit also comes equipped with an outdoor lighting system, making it safer for the officers on the roadway, and it is manned by a retired Highway Patrol officer who commands the unit, which is based out of Raleigh.

“This is a highly visible deterrent against impaired driving,” said Bertie County ABC Board chairman Miles Davis, who along with his Board members, Michael Freeman and James Pugh, spearheaded the morning’s activities. “We want this to serve as a resource to educate these kids to the dangers of drinking and driving.”

“This is about prevention,” said Jeff Strickland, Outreach Programs Coordinator with the ABC Commission. “Prom time is probably our most popular and busiest time; but if we can prevent high-risk incidents, this is the time it has the maximum impact: proms and graduations.”

Strickland concludes that while these resources are great aids in the fight on underage drinking, one of the better ways of prevention is starting conversation, and that begins with parents, family, and coaches.