MURFREESBORO – A nearly 70-year-old bottle of champagne rests on a shelf in Colonial Pharmacy. But it’s not for sale.

The bottle is a part of pharmacy owner Joe Minton’s collection of items and photographs commemorating local veterans and current military service members.

“It’s the least we can do to show our gratitude for their service,” said Minton of the display which has been in the store for the past few years. “It’s open to anybody who is serving now or has served in the past.” 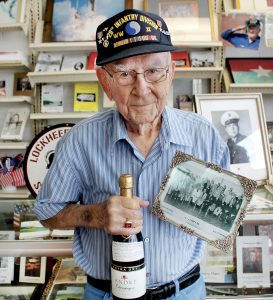 World War II veteran Joe Dickerson holds a bottle of champagne and a cherished photo of his comrades in arms from the 29th Infantry Division’s E Company that stormed the beaches of Normandy, France on D-Day in 1944. Dickerson is the last surviving member of that brave group of men. Staff Photo by Holly Taylor

The bottle of champagne, which belongs to World War II veteran Joe Dickerson of Murfreesboro, is probably one of the most fascinating items in the collection with the history it has behind it.

Dickerson, who recently marked his 96th birthday, served in the United States Army during World War II as a member of E Company in the 29th Infantry Division. He was a participant in storming the beaches of Normandy, France on D-Day on June 6, 1944 and later also was a part of the Battle of the Bulge. He was awarded several medals for his service, including four purple hearts.

“All this started in 1949,” Dickerson recalled as he recounted the tale of the champagne bottle.

That was the year when his company of fellow D-Day veterans held their first reunion, some five years after fighting together in France. It was held in Murfreesboro and only 13 people were able to attend that first one.

“We were just overjoyed to see each other,” he said.

The next year they had 105 people attend the reunion, which was held that time in Chase City, VA. Dickerson recalled one of the lieutenants brought a bottle of champagne, declaring, “the last two of this group will drink the bottle of champagne.”

Dickerson explained the group held a total of 39 reunions stretching across the United States from New York all the way to Texas. He remembered lots of good times with the group, such as when members from up north experienced a southern pig-picking for the first time.

Originally, Dickerson carried the champagne bottle to the reunions, but he began leaving it at home because he worried something might happen to it. As the group’s numbers dwindled down, the champagne bottle rested in a closet in Dickerson’s house until one day his wife Becky asked what he was going to do with it.

By that time, there was only one member left other than Dickerson. The two made plans to meet in Georgia which was about halfway between where they both lived. But before they could make the trip, the other passed away.

“So that leaves me. I’m the only one left,” he continued.

Dickerson thought about what to do with the bottle after that, deciding he would continue to leave it unopened for good. He passed it on to friends in town, but they suggested he add the champagne to Minton’s display at the pharmacy.

“I think it’s where it belongs,” Dickerson affirmed. “Every time I walk into the drugstore, I look at it and I think of the group. I still miss the guys. They were great people.”

Along with the bottle, Dickerson has also contributed a reunion photo, a WWII compass, and a mess kit to the display to rest alongside photos and items from other local veterans.

“It makes me feel good that people are being recognized,” he said of the display. “You’ve got to give Joe [Minton] a lot of credit for that.”

So from now on, the old bottle will remain full of both champagne and memories.

AHOSKIE – Its foundation has witnessed local, state, national and world history over the course of nearly 185 years. Its... read more