LASKER – For a team that had won just three baseball games all season, any positive incentive would be cause for elation.

Hertford County had two of those this week.

The first was breaking a 13-game losing skid with an opening round win here in the Sgt. Will McLawhorn Memorial Scholarship Tournament, and the second came as they successfully defended their title; and, not in why, but how. 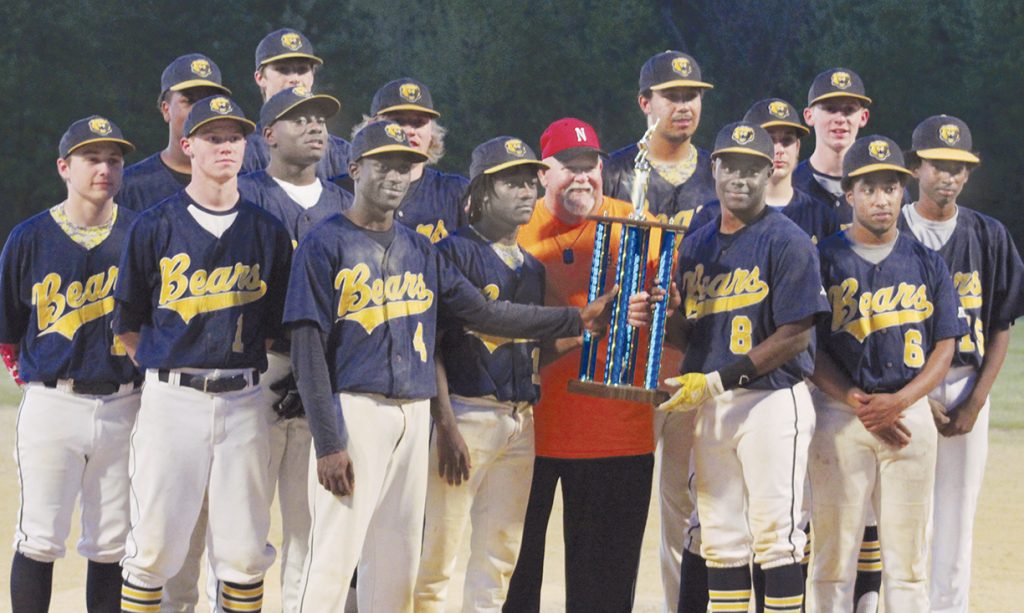 Bears baseball players accept the trophy from Tournament Director Rev. Willie McLawhorn (Will’s dad, in orange) following their victory. It was Hertford County’s third title in as many tries and first no-hitter in the tournament’s eight-year history. Staff Photo by Gene Motley

Parker Bradley pitched a gem of a game, resulting in the eight-year event’s first ever no-hitter, as he took down host school Northeast Academy, 13-0.

“We came out and hit the ball, got great pitching, and played good defense,” said Bears head coach Chris Towell.

Hertford County opened the scoring with a pair of runs in the top of the first inning. Alden Lassiter smacked an RBI base-hit and Harrison Spence had an RBI groundout. It was 2-0, Bears, after one full inning.

Hertford County added one more run in the top of the second on a Tyrek Beverly sacrifice fly. It was now a 3-0 lead for the defending champs.

The Bears broke open the game in the top of the third inning by pushing 10 runs across the plate.

Bradley and Spence opened the frame with back-to-back singles and Zack Lassiter walked to load the bases. Matthew New then had an RBI single, followed by Carlos Slade with another “ribbie” to make it 5-0. Jaden Cumbo and Jaylan White then both coaxed bases-loaded walks for two more RBI, while Beverly followed with a two-run single. Lassiter then smacked a two-run double, giving Hertford County a double-digit lead at 11-0. The 12th run scored on a balk call and finally Spence hit a sacrifice fly that made it 13-0, which held up through the completion of the inning.

Meanwhile, Bradley had been quietly rolling along, mixing his pitches to keep the Eagles hitters off-balance. Only twice did runners reach second base: a hit batter and a passed ball; plus, a pair of back-to-back walks. He struck out the side in the bottom of the fifth inning to end the game and learned he had tossed the first “no-no” in McLawhorn tournament history.

Bradley went the distance for the win: five innings allowing no runs, no hits, and striking out 13. Brandyn Polson pitched two innings for Northeast and was tagged with the loss. Ryan Rowe relieved him for the final three innings.

Hertford County had 14 hits; Alden Lassiter led the Bears with three hits and three runs-batted-in. Beverly, Spence, and Slade had two hits apiece, while Zack Lassiter, T.J. Lassiter, Bradley, New, and White had one hit each.

Hertford County (4-17) re-fires conference play on Tuesday in Windsor against rival. Bertie. Northeast is 7-7 and hosts Albemarle at home in the first round of the TIC Tournament, before it switches to Belhaven at Pungo Christian Academy.