A service to celebrate his life will be held at 11 a.m. on Tuesday, April 30, 2019 at Core Creek United Methodist Church in Newport, NC, officiated by Rev. Judy Billings and Chaplain Jan Dickens. The family will receive friends following the service. Interment will take place at 12 p.m. on Wednesday, May 1, 2019 at Riverside Cemetery in Murfreesboro, NC. 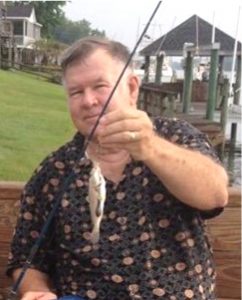 Tired of reading traditional obituaries, Julian penned his own which he felt was truer to his personal style:

Having completed his work and staying pretty much within the lines, Julian Dickens left for Happy Town on Tuesday, April 23, 2019. His final hours were spent joking with medical personnel, while he whimpered, cursed, begged for narcotics and bargained with God to look over his wife, kids, grandkids and pets. His life neither interrupted nor influenced time space continuum of our beautiful planet. Julian was most private with his religion and he always tried to be most open with his love of family and friends.

In his lifetime, Julian was a son, a brother, a cousin, a Cub Scout, a Boy Scout, a football player and though not recognized as intelligentsia, Julian did manage to “toss his tassel” at vacation bible school, kindergarten, high school, a junior college and a four year university. He was also a husband, a father, a grandfather, a friend, a member of the Sea Gate Roosters Men’s Club and a true brethren of the coast.

For most of his life he excelled at mediocrity. His major theme was that life is better when we don’t take ourselves too seriously. He was always quick to laugh at his own foibles, so he obviously laughed a lot and even though he seemingly squandered potential to accomplish, one had to admire his restraint.

Following a thirty-four year professional career, Julian retired to the simple life of the North Carolina coast and enjoyed the pursuit of self-interests, obeying the unwritten commandment, “Thou shalt not hurry.” Everyone always knew what he was thinking, much to the dismay of many. Julian was often wrong, but never was he in doubt. He believed himself to be a Christian, though he often struggled with an unforgiving heart that brooded on wrongs and would not let old bitterness depart.

Julian is survived by many, including his wife, Dixie B. Dickens of the home; daughter, Parrish Dickens Hartgrove and husband Lyle of Raleigh; son, Julian “Jed” Edward Dickens, Jr. and wife Courtney of Raleigh; brother, Jan Johnson Dickens and wife Joan of Suffolk, VA; grandchildren, Michael “Deuce” Anthony Johnson, Jr. of Winston-Salem, Haven Elisabeth Dickens of Raleigh, Hartley Barnes Dickens of Raleigh, Carter Hartgrove of Wilmington, Sydney Hartgrove of Hampstead; and a close cousin, Cecil S. Holloman, Jr. of Ahoskie, most of who probably preferring anonymity. He is thankful though for their contributions to his life and for their influence on his personal character. To each he wishes “Happy Trails.”

He was preceded in death by his parents, Perry Mecum Dickens and Shirley Elaine Liverman Vann.

In lieu of flowers or memorials, Julian would prefer that you visit your favorite restaurant and enjoy a good satisfying meal with those special to you.