Hall nominated for seat on State School Board

RALEIGH – A veteran local and state educational administrator has been nominated by Gov. Roy Cooper to an at-large seat on the North Carolina Board of Education.

J. Wendell Hall, currently in his 19th year on the Hertford County Board of Education and who has previously served as an Interim Superintendent for four school systems in northeastern North Carolina, now waits for confirmation from the state’s General Assembly before he can be officially appointed to the state board.

“Being nominated by our governor for such a position is an honor within itself,” Hall said on Thursday of this week. “I will proudly serve our great state and uphold the best interests of our schoolchildren, teachers and administrators should the General Assembly confirm my nomination.” 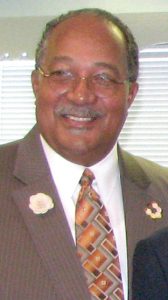 “At this stage, all I know is that my nomination by the governor has been read into the minutes of the General Assembly,” Hall noted. “Now it’s just a waiting game for the NC House and NC Senate members to cast their votes one way or the other on confirmation. I do not know of a date when that voting process will occur.”

Hall said he is working with one of the governor’s aides to schedule a date when he can meet face-to-face with some of the key members of the General Assembly.

“My appointment will initially be brought before the Rules Committee and then go to the floor of the House and Senate for a vote,” he said. “This all started back in early March with a call from the governor to see if I was interested in an appointment to the state board.”

“Working in education is all I’ve ever done,” said Hall, a 72-year-old native of Winton who graduated in 1964 from C.S. Brown High School. “It’s still what I want to do….to give our children – here locally and all the 1.4 million kids in K-12 across the state – the best basic and sound education that can be offered, no matter where they are.”

Hall also has 10 years worth of classroom teaching experience at Red Oak Elementary School in Lawrenceville, VA and at R.L. Vann School in Ahoskie.

Prior to being elected to the Hertford County Board of Education in 2000, Hall served as Deputy Superintendent of Schools in his home county where he was twice named Interim Superintendent; and similarly led school systems in Northampton County, Weldon City, and Warren County.

Should his nomination be confirmed, it will not mark the first time that Hall has participated in a meeting of the State Board of Education.

“I was an ex-officio, non-voting member, of that board as an advisor during my one-year term as president of the State School Board Association,” Hall recalled. “Little did I know at that time that I would possibly one day serve as a full-fledged member. Based on my experience, I feel like I have a lot to offer.”

Married to Bettie Hall (they will observe their 50th wedding anniversary in August of this year), he is the father of a son, Jermain, a financial consultant living in New Jersey, and enjoys spoiling his two grandchildren: Jared (age 10) and Kyndel (5).

Hall’s nomination for this esteem position at the state level prompted a local response.

“Mr. Hall has dedicated the bulk of his life to serving students and staff all over northeastern North Carolina as well as the NC Department of Public Instruction,” said Dr. William T. Wright, Superintendent of Hertford County Public Schools. “His experience as a teacher, DPI employee, and District wide leader, including stints as Interim Superintendent in multiple districts, make him the ideal person to serve on the State Board. Additionally, he has served the Hertford County Public School District with excellence for nearly 20 years as a Board member and many additional years prior to that as an employee in various progressively responsible positions.

“Right now, particularly, it is critical that we have a voice wherever we can get it in Raleigh that will truly speak up for the unique needs of the school communities located in northeastern North Carolina,” Dr. Wright continued. “Mr. Hall certainly understands that and will provide a strong perspective not only for Hertford County Public Schools, but for all children in northeastern North Carolina and throughout the state.”