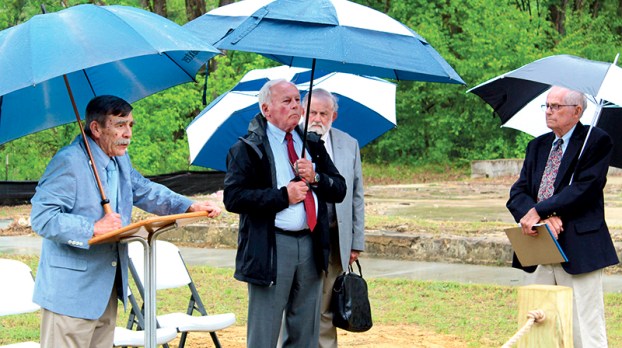 Taking part in the historical marker unveiling event on April 19 were, from left, Murfreesboro Mayor Hall Thomas, David Farnham, John Parker, and Percy Bunch. They were joined by other members of the community to celebrate the occasion. Staff Photo by Holly Taylor

MURFREESBORO – A group of people huddled under umbrellas here Friday afternoon as they watched the unveiling of a new historical marker in Murfreesboro.

The event was a commemoration ceremony for Murfrees Landing, the site on the Meherrin River where the town of Murfreesboro was established in 1786. A group of people, spearheaded by Percy Bunch and others from the Murfreesboro Historical Association, worked to have the historical marker installed as a way to keep the history alive even though so much time has passed since then. 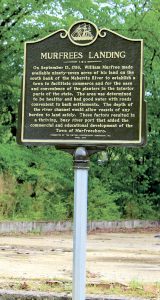 The privately funded historical marker stands tall at Murfrees Landing which is located at the end of Hart Street by the edge of the Meherrin River. Staff Photo by Holly Taylor

“Mr. [William] Murfree made available 97 acres of land for the town at Murfree’s Landing,” explained John Parker, Chairman of the Historic Murfreesboro Commission, as he addressed the crowd. “It’s been over 200 years since they did that, but we’re here today.”

Parker noted the town name was originally spelled back then as “Murfreesborough.”

Carole Farnham, a member of the Murfreesboro Historical Association, added, “a community of men recognized the need for a port on the river. This would facilitate easier access to their crops and ease of travel.”

“This is the site where the dream of the town, Murfreesboro, began,” she continued. “Because of the access to the river, Murfreesboro became a center for trade, travel, and education.”

Murfreesboro Historical Association President Lamar Van Brackle spoke of how the site served as a major river port for years, connecting the small town to the rest of the world. He mentioned, for example, a seafaring ship which was constructed there in the mid-1800’s. Originally, the ship was named the “Chowan” and then the “Southern Star” before it was acquired by the United States Navy and renamed once again as the “USS Crusader.”

“At one point, somebody said you could walk across this river on the vessels that were moored here, carrying out this trade,” Van Brackle said. “It really is a historic site, and it’s really great that we elected to preserve the site today.”

Murfrees Landing is located at the end of Hart Street, just beyond the town’s cemetery. The tall historical sign, marked at the top by the image of the aforementioned ship, rests by the riverside where visitors can read the story of the town’s origins.

Currently, the site is slated not only to be a place to reconnect to the past, but also to enjoy the natural beauty Murfreesboro has to offer.

Mayor Hal Thomas said the addition of the marker was simply phase one of the project. The town plans to build a pier at the site and also to develop it as a recreation area for residents and visitors.

Thomas thanked the people who had stepped forward to clean up the historical site, praising Bunch in particular for his work.

Farnham too thanked Bunch for his contribution to the preservation of history.

“He gathered a group of people who supported him in this vision. Together they took a rundown, overgrown piece of land and brought it back to a place where we can now view it with pride,” she said. “Once again, we can tell the story of the beginning of our town.”

Bunch opened and closed the ceremony by acknowledging all the help he’s had along the way.

“I can’t say it’s a beautiful day,” Bunch said, noting the rainy conditions, “but I will say I appreciate this group of people coming out in this weather. I want to thank everyone here for their support.”

AHOSKIE – It was basically two separate fires at the same address here Thursday, and the second one proved as... read more