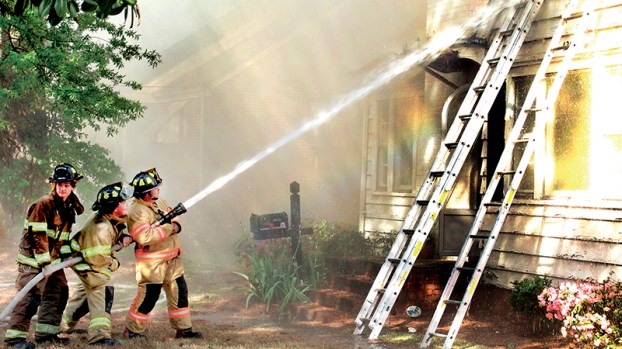 Firefighters from three departments battled a stubborn blaze for over six hours on Thursday at an Ahoskie residence located on North Academy Street. Staff Photo by Cal Bryant

AHOSKIE – It was basically two separate fires at the same address here Thursday, and the second one proved as the most damaging thanks to persistent, gusty winds and possibly a spark that hid itself from view.

The fire also caused damage to a vehicle and residence next door. Bradley reported that damage as “minimal.”

“The wind was a definite factor in this fire,” Bradley said of the gusty conditions.

The initial fire was reported at 3:07 p.m. Ahoskie firefighters responded to find a garage, detached from the home, fully engulfed.

“We could see the smoke when we were leaving the fire station,” Bradley noted.

The Ahoskie firefighters poured water on the rubble and then began to investigate whether or not the blaze had spread to the residence.

“There was some fire damage to the left rear of the house; that area was the closest to the garage,” Bradley said. “Our initial assessment didn’t show anything, but suddenly we had a fire on our hands in the attic of the house.”

He added that fire started around 4:10 p.m. With the wind still blowing and due to the fact of the close proximity of the other homes in that area, Bradley made the decision to call for assistance from the Winton Fire Department.

“We’re still investigating, including going back to the house on Friday morning, but we believe the fire in the house started after a spark from the garage fire got imbedded in some pine straw that was in the gutters and that set the fascia board on fire,” Bradley stated. “From there it spread to the attic.”

As the tricky blaze continued, Bradley also summoned the assistance of the Union Volunteer Fire Department.

Even though the structure is still standing, Bradley said the smoke and water damage to the ground-level portion of the residence caused it to be ruled as a total loss.

Bradley thanked the assistance the Ahoskie firemen received from the Winton and Union departments as well as the traffic control maintained by local law enforcement vehicles.

“We are also so grateful to have our fateful EMS crews on the scene of any fire we respond to,” Bradley added. “They make their rounds and check on us on a consistent basis to make sure we’re okay physically.”

AHOSKIE – A local man is behind bars in Pitt County, accused in a home invasion and shooting that took... read more