NEW BERN – A former Sergeant with the Gates County Sheriff’s Office will wait several more months before learning of the length of his prison term.

Officials with the U.S. Attorney’s Office for the Eastern District of North Carolina said the sentencing phase in its case against 33-year-old Brandon Scott Hawks has been delayed until the June 20 term of court in New Bern.

Hawks was indicted on May 7, 2018 by a federal grand jury in Raleigh. At that time, Robert J. Higdon, Jr., US Attorney for the Eastern District of North Carolina, said the indictment was for two counts of possession of a stolen firearm, and one count of possession with the intent to distribute a quantity of controlled substances. 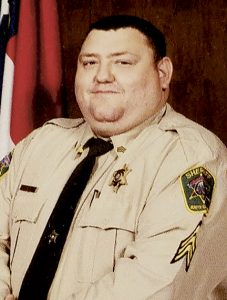 The drug charges were dismissed as part of a plea agreement reached last month.

Each of the firearm offenses carries a maximum penalty of 10 years in prison.

Hawks was arrested by the NC State Bureau of Investigation in December of 2017. He had been employed since 2006 with the Gates County Sheriff’s Office.

The indictment alleges that beginning on July 23, 2017, and continuing until December 6, 2017, Hawks possessed a stolen firearm, specifically a Glock 26 handgun. The prosecution alleges that the firearm was unlawfully seized by Hawks during a traffic stop on July 23, 2017 and was never submitted as evidence to the Gates County Sheriff’s Office. That weapon was found at Hawks’ residence on December 6, 2017 (the day of his arrest by the SBI and subsequent termination of employment with the Gates County Sheriff’s Office).

Count two of the indictment charges Hawks with possessing a stolen firearm from May 27, 2014 until December 6, 2017.

Count three (which is now dropped) charged that on December 6, 2017, Hawks possessed, with the intent to distribute, several controlled substances, to include heroin, crack cocaine, cocaine, fentanyl, oxycodone, morphine, methamphetamine, and marijuana. The controlled substances were considered property of the Gates County Sheriff’s Office and were seized during criminal investigations.