AHOSKIE – A local man is behind bars in Pitt County, accused in a home invasion and shooting that took place March 24 in Greenville.

Lydell Maurice Carter, Jr., age 18, of Maple Street, Ahoskie, was charged with two felony counts each of attempted first degree murder and assault with a deadly weapon with intent to kill. 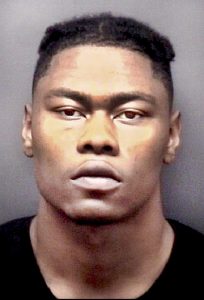 Carter was turned over to Greenville authorities and booked into the Pitt County Detention Center on Monday under an $800,000 bond.

Hunter also confirmed an earlier arrest was made in the same crime. She said that on April 8, Iwanniza Love, age 17 of Greenville, was taken into custody by Greenville Police. He faces the same charges as Carter.

The crime occurred March 24 where a home invasion took place at Carolina Creek Apartments in Greenville. Two residents – Stephen Polansky, 22, and his 20-year-old brother, Michael – who reside in one of the apartments were shot and wounded.

Hunter said that both victims are enrolled at Pitt Community College where they are on the baseball team.