MURFREESBORO – Being able to fly through space is an experience reserved for NASA astronauts… and also for elementary students in a Starlab planetarium.

From Apr. 15 through Apr. 17, the Riverview Elementary School gymnasium became the site of an adventure through space for all the elementary students of Hertford County Public Schools. The event was a partnership with the public libraries located in Ahoskie, Winton, and Murfreesboro.

Small groups of students took turns entering the large inflatable Starlab dome and witnessed a short presentation projected onto its ceiling. Branch Manager Tomeka Roulhac of the Hertford County Public Library in Winton worked the projector and guided students through the experience.

“It was like watching a 3-D movie,” said Riverview fifth grader Karen Ortiz. 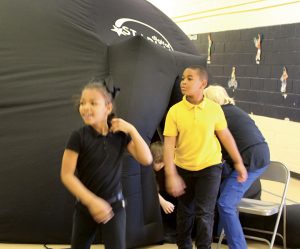 The presentation began with a 24-hour time-lapse video of the sky, a view many can see just looking up outside. But from there, the images shifted to views of Earth, constellations, and other planets from outer space. As the planetarium offered close-up views of Saturn, Mars, Jupiter, and more, the students didn’t hesitate to offer up their own knowledge of the subject.

“I liked it pretty good because you could see all the planets close up,” said fellow Riverview fifth grader Ariel Solomon.

Many of the fifth-grade students agreed that they enjoyed watching the images zoom up close and personal to each planet like they were flying through space.

“My favorite part is when every single planet came to us because it looked like it actually happened but it didn’t,” Fadua Mendez said.

Angelina Lassiter said her favorite part was when “you could see what the planets really looked like.”

“I got to see constellations that I’ve never seen before,” added classmate Tamera Porter, noting the different star formations that appeared throughout the presentation.

Jah’Mir Wheeler enthusiastically summed up the experience he shared with his classmates by saying, “It was spectacular and very realistic. I learned a lot of science in that. It was the best experience of my life.”

Although Riverview was the host school, students from Ahoskie Elementary School and Bearfield Primary School also traveled to enjoy the Starlab planetarium experience. Bearfield math and science teacher Mary Lou Weller said she was glad all the students had this kind of opportunity.

“They don’t get to go anywhere normally to have an experience like a planetarium. It’s not feasible for us to take a field trip like that,” Weller said, noting distance and cost as factors.

Being able to interact with the subject outside of just a textbook in a classroom was one of the positives of the experience Weller added, and that was something Riverview Assistant Principal Terrell Deloatch agreed with.

“It is a great hands-on experience because they can make that connection to what they’ve learned in the classroom,” Deloatch explained.

The Starlab planetarium presentation is an ongoing event hosted by all the branches of the Albemarle Regional Library with the dome itself being on loan from the state library of North Carolina.

Judy Hachey, who serves as Branch Manager of the Elizabeth S. Parker Memorial Library in Murfreesboro, said they had been looking for a facility large enough to accommodate the dome. That’s when they decided to partner with the school system. She noted Riverview P.E. teacher Diane Gatling was one of the most instrumental people in helping to coordinate and make sure everything ran smoothly. Gatling had fun activities ready for the children as they each waited their turn to enter the dome.

“We were just really thrilled that Hertford County Public Schools partnered with us to do this because we’re doing it for the kids,” Hachey said.

Ahoskie Branch Manager Cindy Henderson added, “we have let this resource be used by so many more children in our area than it would have been just as a small open community event.”

Henderson said she hoped they would be able to bring Starlab back again in the future.