MURFREESBORO – The annual Murfreesboro Chamber of Commerce Banquet was held here on Thursday, Apr. 11 with former US Ambassador James P. Cain as the featured keynote speaker.

Cain served as the ambassador to Denmark from July 2005 to January 2009. Before his diplomatic service began, Cain worked in several other capacities including a 20-year stint with international law firm Kilpatrick Stockton in the firm’s Raleigh office and as President and Chief Operating Officer of the NHL Carolina Hurricanes from 2000 to 2003. He received his undergraduate and law degree from Wake Forest University. After his work as an ambassador came to a close, Cain has focused on devoting his energy to economic development projects in North Carolina. 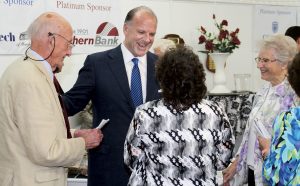 Cain is married to Helen Revelle Cain, a Murfreesboro native, and the couple has two daughters.

The former ambassador opened his speech by sharing a few humorous stories about his time in Denmark before getting to the heart of his message.

He talked about his efforts to share messages about the American spirit with the people of Denmark. Those messages focused on three different things: the importance of diversity and inclusion, the critical role of entrepreneurship and innovation, and the power of private philanthropy and corporate social responsibility.

In his efforts to promote those points, Cain started a sports outreach program to immigrants living in Denmark, and he also helped sponsor gala events to raise money for charity, something that was uncommon in the country at the time. He said those initiatives have continued even though he and his family left Denmark 10 years ago.

In his speech, Cain also praised capitalism and expressed concern about young people who were disillusioned with the system.

“Maybe they haven’t been out of the country enough,” he said. “When you spend time outside of America, you realize how extraordinary our country is.”

He claimed young people have been told that competition and risk are bad, and he said he understood the recession of 2008 had an impact on them. But he emphasized that the country was built on risk, opportunity, and hope.

The retired ambassador encouraged people to look at the rest of the world to better understand America.

“For those who do take the time to study, to investigate, to visit, to experience what the rest of the world is like, they’ll understand how unique America is,” he said.

He closed his speech with the same words he said he shared to a graduating class from Chowan University several years ago when he was the commencement speaker.

Earlier in the evening, Chamber of Commerce Director Daryl Williams welcomed guests to the event. Williams stepped into the role of director last year, and he thanked the Chamber for their support so far.

“We’ve had a very exciting and productive eight months at the Chamber,” he said, noting updated social media, successful events like the Christmas parade, and upcoming projects such as the new wayfinding signs which will be added to town soon.

“As your Executive Director, I work for you guys,” Williams reminded the Chamber members as he promised to continuing working to provide support for local businesses and the town itself.

Chamber President Matthew Howell also took a moment to address the crowd gathered Thursday evening. He explained at the beginning of his tenure, which began in 2017, that he underestimated the amount of responsibility the position required.

“I have no doubt that there was a lot of frustration on the part of our membership,” he said. “But what is the point of a little adversity if you don’t learn anything from it? What I and the [Chamber] Board learned was that people care about this area. People care about Murfreesboro.”

He closed with a reminder that Murfreesboro is a destination and the Chamber welcomes businesses and visitors alike.

The evening’s agenda also included the presentation of various annual awards. The Earl 98.3 Community Service Award was presented to Holly Taylor. Following that, Kay Thomas was the recipient of the R-C News Herald Front Page Award. Lastly, Debbie Edwards was given this year’s Chamber of Commerce Award.