If the effort is successful, Byrum has pledged to spend a night in a kennel at the shelter—and Andy Smith, the director of the county’s Health Department, has offered to join him. 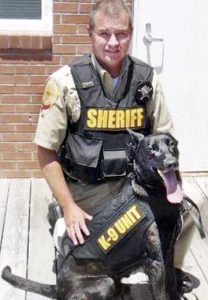 Kevin Byrum is a Deputy and K-9 Officer with the Northampton County Sheriff’s Office.

“The shelter desperately needs to expand [and] I want to help the dream of expansion become a reality,” writes Byrum. “The shelter only has eight kennels and is maxed out on many occasions. My birthday is this month and I’m asking for donations for the shelter. No amount is too small or too large.”

“Spaying and neutering is the key to keeping animal shelters from bursting at the seams, and an updated facility would do wonders in helping the homeless animals who are already there and in need of loving families,” says PETA Senior Vice President Daphna Nachminovitch. “PETA wholeheartedly supports this compassionate community effort and gives kudos to Deputy Byrum and Andy Smith for offering to put themselves in the dogs’ place for a night to raise not just funds but also awareness.”

Byrum’s long history of animal advocacy includes helping PETA rescue two dogs: One was found tethered to a plastic garbage can in freezing temperatures with no food, water, or shelter, and the other had four broken toes and had been abandoned at a rural property in a filthy, unused silo. Both dogs have since recovered and been adopted into loving homes.

But not every dog is as lucky as them: Each year in the U.S., millions of lost, abandoned, or unwanted dogs and cats enter animal shelters, and more than half of them must be euthanized because there aren’t enough homes for them. That’s why the Northampton County Health Department asks all families to have their dogs and cats spayed or neutered—which is the only way to stop the companion animal overpopulation crisis at its roots—and to adopt dogs and cats from animal shelters, rather than buying them from breeders or pet stores, which contribute to the problem.

Copy and paste the link shown below for more information and to make a donation. All funds raised will go directly toward improving the shelter.