WINDSOR – For his punishment, former Powellsville mayor Thomas Asbell has accepted a plea deal, admitting guilt to one count of embezzlement and agreed to pay the town he once served $34,307.69 in restitution.

The criminal case against Asbell arose in 2016 with the discovery of several financial improprieties within the management of the town’s finances and its utilities. An investigation was carried out, and Asbell was asked to resign by the former Town Board. 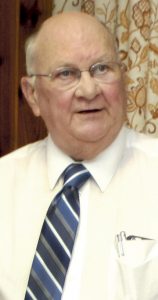 On Monday in Bertie County Superior Court before the Honorable Judge Marvin Blount, the 76-year-old Asbell quietly uttered yes and nodded when the single charge was read: one (1) count of felony embezzlement. Conviction of this Class-H felony in the state could have carried a possible jail sentence of anywhere from 4-to-25 months.

The former mayor was represented by private attorney Wes Camden who said his client would be entering a plea.

Seated in the front row were current mayor James Peele and members of the Powellsville Town Board of Commissioners along with the Town Finance Officers Jennifer Evans and Melissa Beddard of Layton Evans Accounting, Inc.

Evans, speaking before the judge, told of the disclosure of what she considered misappropriation of funds by her office, prompting a collection of the town’s financial data that was later turned over to the State Bureau of Investigation. These revelations, which began some 30 months ago, prompted the call for the mayor’s resignation, which he did in late 2016.

Prior to rendering his decision, Judge Blount asked present members of town government if they cared to make a comment.

Peele said he felt the real victims here were the town’s citizens, and that while it had been a painful process, he felt the town had learned a lot.

Commissioner Gerald Waters wanted to know what had happened to a tractor alleged to have been purchased by Asbell with town funds, but has not since been accounted for.

“We received a check, but that implement was bought with town money,” he said.

Waters also told of necessary chlorine for the town’s water system that had not been applied to the drinking water for a period of several months.

“That could have caused a serious health problem,” Waters decried. “We’ve spent months trying to get this right; this town has been struggling and we need over $70,000 to get out of debt.”

Commissioner Carlyle Hoggard said the town had placed its trust in Asbell’s leadership, and he felt that trust had been betrayed.

“Our community is small, consisting mainly of elderly retired people,” Hoggard stated. “And, his legacy will be one word: greed. The amount of money our town lost far exceeds this settlement.”

Commissioner Hattie Askew said the Board members had refused salaries for this term as part of the town’s austerity.

“I feel for the people,” she said. “Many live on fixed incomes and they’ve already had to experience two increases in water fees.”

Peele returned to say he felt like despite what had been a painful experience, the time had come now for closure.

Camden said his client had experienced a difficult time; that he was contrite and deeply sorry for all that had taken place.

“He just wants to set the record straight,” the attorney said.

Judge Blount said while he was not entirely comfortable with the settlement agreement, he felt the state has proven its case on the one charge of embezzlement. He added while the financial settlement will not repair the damages, it will at least provide the town some relief from its mounting utility expenses.

“How the victims feel here is very important to me,” the judge said. “It’s time now to take hold of what has been offered.”

As his first restitution payment, Asbell submitted a check for $20,000 on Monday, which was turned over to the mayor and the Town Board. He now has a probationary period of 24 months (2 years) to pay the restitution balance of $14,307.69 which will be pro-rated. During this time he also cannot hold fiduciary office; and he must make on-time payments, or risk further penalties.

Following the proceedings, several Board members gathered first outside the courtroom and later in the parking lot and spoke before they departed.

“I don’t think everything was done that could have been done with the case,” sighed Peele. “There’s very little satisfaction with this amount of restitution. We have a USDA water bond interest payment that is due, plus what is owed on the town’s sewer system. Our town was left with a lot of expenses.”

“I think it’s the best we could get based on the process,” shrugged Hoggard. “The amount of money the town of Powellsville suffered as to his activities far exceeds the settlement.”

“Understand this, we accepted the plea agreement and we got the best we could for the town’s losses though we think there was much more that could have been proven; but now we have to move forward. It’s been a long 30 months,” Hoggard concluded.

WINDSOR – Adhering to comments made during the public hearing at the first reading, Bertie County Commissioners at their April... read more