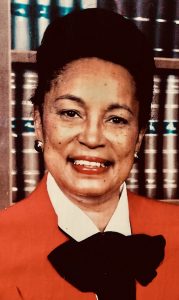 Dr. Jones was born and raised in Harrellsville, a small town in northeastern North Carolina. She graduated valedictorian from high school and entered Hampton University. After two years at Hampton, she transferred to Florida A&M University where she pledged Delta Sigma Theta Sorority Inc., Beta Alpha Chapter. She graduated from Florida A&M University with a Bachelor of Science degree in Business Education and English.

Dr. Jones went on to receive Masters and Doctoral degrees in education from East Texas State University (Texas A&M at Commerce). She began her teaching career in the public schools of Pittsburg, Pennsylvania the European Dependent School system, and part-time at Cedar Valley College in Dallas Texas. In June 2000, she retired from the Dallas Independent School District after 34 years of service. Her last 10 years were spent as principal of R. L. Thornton Elementary School, an outstanding school known for academic excellence and parent/community involvement. In appreciation for her untiring and dedicated service, the auditorium at Thornton was named in her honor. She continued her work with DISD, serving as a Bilingual Support Specialist in the Alternative Certification Department.

Dr. Jones was a Den Mother for the Boy Scouts of America, worked as a curriculum writer, team teaching project chair, committee member of Southern Association Evaluation Team. She received many awards, honors and commendations for her work toward educational excellence and community involvement. The National Council of Negro Women, Inc., Oak Cliff Section awarded her the Mary McLeod Public Service Award. She was also the recipient of the Unsung Heroes Award, given by the Epsilon Chapter of Eta Phi Beta Sorority, Incorporated. Dr. Jones held memberships in numerous organizations including the Dallas Regional/National Alliance of Black School Educators (dr/NABSE), where she was a former president.

Dr. Areatha Simmons Jones was preceded in death by her parents, Delno Simmons and Fannie Wiliford Simmons, and 12 sisters and brothers. She leaves to cherish her fond memories, her husband of almost 63 years, William C. Jones, and two adult children, William Jones and Constance Jones, all of Dallas; and a host of nieces, nephews, other relatives, and friends.