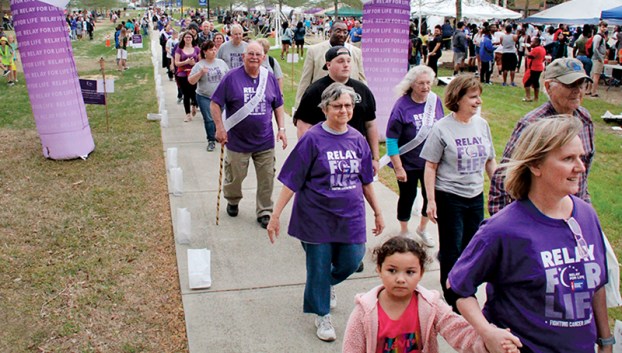 Cancer survivors pass under a colorful inflated entryway as they begin the ceremonial first lap on Friday evening at the 2019 Hertford-Gates Relay for Life. Staff Photo by Cal Bryant

Both are well-respected professionals in their chosen career fields – Morrison is a Hertford County Magistrate Judge; Stevens, a native of Gates County, is a 17-year teaching veteran in the public school system. 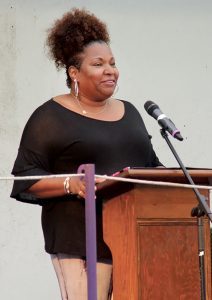 Each enjoy the love of their respective families, especially the admiration they receive from their children.

They both have built a solid foundation of support from others….a fact that led these two women to share their most important bond, the gift of life after surviving breast cancer.

Morrison and Stevens wore their individual emotions on their sleeves on Friday night where they served as the featured speakers during the opening ceremonies of the 19th annual Hertford-Gates Relay for Life. They each offered words aimed to inspire others of the importance of early detection and having the will to survive.

The event, which was shortened due to rain overnight Friday and into Saturday morning, was held in Squirrel Park on the campus of Chowan University.

Twelve years ago, at the age of 46, Morrison was a single parent of two. She recalled at that time of being very fit and healthy. However, as it is with most types of cancer, a person’s lifestyle changes rapidly upon diagnosis.

“It started with some tenderness in my right breast,” Morrison remembered. “I really didn’t think it was anything. I didn’t have time to think about myself as I was a single parent.”

Upon the encouragement of friends, Morrison made an appointment with a doctor. A lump was discovered in her right breast. An immediate appointment was made with a surgeon, but tests came back negative on a pair of biopsies. However, the doctor recommended removing the lump.

“A couple of weeks later, I was called into the doctor’s office where he shared the news no one wants to hear….I had Stage 2 breast cancer,” Morrison said. “There’s nothing that prepares you for that moment when you hear those words.

“I thought I was going to die,” she continued. “My first thought was who is going to take care of my daughters. How do I tell my mother?”

The doctor shared even more disheartening news with Morrison, the fact that breast cancer spreads rapidly in African-American women.

“I had to prepare myself for the fight of my life,” she stressed.

As it is with women and their hair, Morrison fretted over the notion of losing hers, and initially shopped for wigs.

“However, I decided against wearing a wig; I wanted women to know it was okay to ‘rock’ a bald head,” she laughed.

Following a lumpectomy (surgery that removes only the cancerous tumor and a small rim of normal tissue around it), Morrison underwent 16 weeks of chemotherapy and 33 radiation treatments.

“I had very supportive friends who looked after my daughters, picked them up from school, and my mom stayed with me pretty much the entire time,” she said. “She left to go home and check on some things. Little did I know that she was sick the entire time. The day I went in for my last radiation treatment, as I was ringing the bell (marking the end of that process), signifying a new beginning, my mom had a heart attack and died. I’m so thankful for the time we shared and the light she passed to me.

“We have all been touched by cancer in some way, and we are challenged to share our light in the fight against cancer. I’m so happy to be here 12 years later to share the story of my fight. I’m Deborah Morrison; I’m a survivor,” she concluded.

Like her survivor counterpart, Stevens shared the story of her battle to beat the odds.

At the age of 38, her life took an abrupt turn in August of 2017 when she noted intermittent itching in her breast. Three months later, while dressing at home for another day of teaching, Stevens said she noticed a lump under her arm. 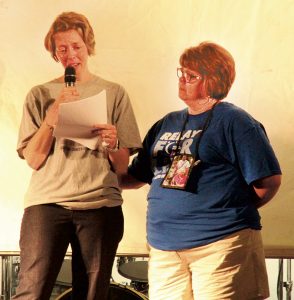 At Friday’s Relay for Life opener, breast cancer survivor Christy Stevens (left) tells of her battle vs. breast cancer. Joining her on stage is Nellie Chamblee, who served as the Lead Chair for the 2019 Hertford-Gates Relay. Staff Photo by Cal Bryant

“I knew it was cancer,” she recalled. “I made an appointment the same day with my doctor.”

One day later, Stevens was at an appointment at the Carolina Breast Imaging Center in Greenville for her first-ever mammogram. That led to an immediate biopsy, which came back positive for cancer.

“My world immediately changed,” Stevens stated. “I was battling invasive ductal carcinoma (the most common type of breast cancer).”

Later the same day, Stevens said she and her husband, Gary, faced the toughest situation of their lives….sharing the news of the cancer diagnosis with the couple’s three children.

“I still can’t forget the emotions in that room that night,” said Stevens, her voice choked with tears. “But at the same moment I knew how powerful God is and that we as a family would pull together and beat this.”

With the power of prayer behind her from a small army of friends and family, Stevens underwent a lumpectomy on Dec. 12, 2017. A small tumor was removed and Stevens began 12 rounds of chemo on Jan. 3, 2018.

“To be honest, I was terrified, but I held fast to the verse: ‘A cheerful heart is good medicine, but a crushed spirit dries up the bone’ from Proverbs 47:22,” Stevens stressed. I reminded myself daily of that scripture. I was determined I was going to be there for my three babies.”

Thirty-three rounds of radiation started on April 9. Although exhausted, Stevens returned to teaching. Her follow-up treatments continued until December of last year.

“God brought me and my family through this journey; through this battle. I’m now better at looking at the positive side of things. I gained amazing friendships that I never experienced before. I feel so blessed and I’m thankful for everything God has done for me,” she closed.

Despite the weather-shortened event, H-G Relay raised nearly $153,500 of its $210,000 goal. Event Chair Nellie Chamblee noted that many teams, forced to leave early due to the rain, had not yet turned in their money or completed fundraising activities.

“We will be super close to our goal if not over by the end of the (Relay) year in August,” said Chamblee.

“The weather didn’t dampen our spirit to Relay,” Chamblee added. “It was the best thing for safety to cancel the Saturday events due to the unfavorable weather, but those events will be rescheduled and soon. Kids Walk is always a highlight of the weekend for the children and the adults and we are planning an event to encompass the Kids Walk and team fundraisers in the near future.”

MURFREESBORO – The annual Murfreesboro Chamber of Commerce Banquet was held here on Thursday, Apr. 11 with former US Ambassador... read more