Bertie High showed plenty of resolve in picking up a pair of wins here last week; a 7-6 come-from-behind non-conference victory over Northside-Pinetown on Thursday, and then snagged another late lead in a 3-2 squeaker on the road over Elizabeth City Northeastern.

The Northside game was tied 6-6 in the bottom of the seventh when an error scored the winning run for Bertie.

The game was scoreless until the bottom of the fourth when Bertie batted around and scored six runs. 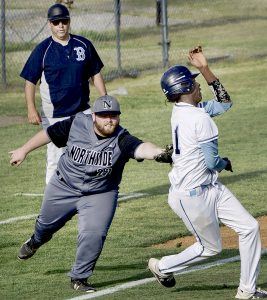 Bertie’s William Alston (right) is tagged out by Northside third baseman Matt Adams (center) as Bertie coach Bobby Harmon looks on. Bertie won 7-6, and then later squeezed by 3-2 over Northeastern for the Falcons’ third win in a row. A.A. Imaging / Andre Alfred

Alden Cottle led off with a double, went to third on a passed ball before a walk to Jaijuan Vick put runners on the corners. A Dylan Hoggard base hit scored Cottle, and then Caleb Damo’s shot down the third base line scored two more. After a Trenton White RBI scored Damon two more runs scored on errors for a 6-0 Falcon lead.

But Bertie gave it all back in the top of the fifth as the Panthers tied the game at 6-all. It took the bottom of the seventh to get the winning run as pinch-hitter Ja’Keise Freeman singled, went to third on White’s base hit, then scored the game winner when Evan Wells reached on an error.

Wells got the win on the mound for Bertie. He surrendered no runs on two hits over one and two-thirds innings, walking one. Trenton White and Caleb Damo entered the game out of the bullpen and helped to close out the game in relief. White recorded the last three outs to earn the save.

Bertie racked up ten hits on the day. White went 3-for4 and Wells was 2-for-4. Cottle, Hoggard, Damo, Freeman, and William Alston had the other hits for Bertie.

“We had a bad inning and let them back in the game, but we made some big time plays to come back and get the win,” said Bertie coach Bobby Harmon. “Damo had a highlight play at short, Dylan Hoggard with a diving catch in right, and Ja’Kiese with a huge pinch hit single.  I’m really, really proud of my kids.”

One night later, on the road, Bertie snagged a late lead and defeated Northeastern 3-2 on Friday.

The pitching was strong on both sides. Bertie pitchers struck out six, while Northeastern pitchers sat down ten.

Bertie fired up the offense in the second inning when White singled on a 1-0 count, scoring Damo with the Falcons’ first run. However, single runs in the third and fourth innings gave the Eagles a 2-1 lead.

In the top of the seventh, White singled, stole second and third, and scored on Cottle’s base hit. Wells, who’d walked after White’s hit, then scored the game winner on a passed ball delivered by Tucker Oliver.

White went three innings to get the win, allowing no runs on two hits, three strikeouts, and no walks. Wells started for Bertie. He went four innings, allowing two runs on five hits, striking out three and walking one.

Bertie racked up seven hits on the day. White, Cottle, and Damo were all 2-for-4, with Ayden Harmon getting the other Falcon hit.

“Great win for us,” said Coach Harmon. “I can’t say enough about how some of these kids are progressing.  Our outfield play has gotten extremely better this week and we have just pitched better.”