The Colts opened the scoring with three runs in the top of the second inning, but the Rams answered by doubling down with six runs in their half of the frame. 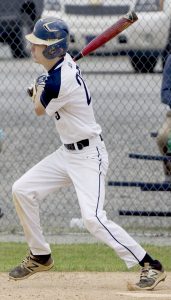 Ridgecroft School’s Zeb Askew smacks one of his four hits Monday afternoon in a 19-3 Rams rout of The Albemarle School. Askew drove in four runs in the contest as the Rams maintained first place in the Tarheel Independent Conference. A.A. Imaging / Andre Alfred

After a Boone Barkley walk, Jack Jones was hit by a pitch and Treyce Myers slapped in infield single that loaded the bases. Barkley scored on a balk call and two outs later, Blayden Miller walked to re-load the bases. Bryce Stevens then had an RBI single, Cody Peterson followed with a two-run double, Askew had an RBI triple, and Luther Glover brought in a run with a base-hit. The Rams led 6-3 after two innings.

Ridgecroft broke the game open, and likewise the spirit of the visitors with 13 runs in the bottom of the third. A hit batsman, error, and a base-on-balls loaded the bases before Cody Peterson got an RBI by walking in a run. From there, the floodgates erupted. Myers scored on a balk, Askew had an RBI single, Peterson scored on a wild pitch; Caleb Porter had a two-run single, all upping the lead to 12-3, and the Rams weren’t finished. Myers had a bases-loaded walk, Porter scored on a wild pitch, Peterson had a two-run single, Askew capped off his two-run triple by stealing home for the inning’s final run and a 19-3 Rams lead after three innings.

Albemarle tried to fight on for more baseball, loading the bases with two outs in the top of the fourth, but a groundout to first base ended the game with a 16-inning win for the Rams in four innings.

Glover got the start on the hill and pitched two innings for Ridgecroft, allowing three runs. Porter pitched an inning-and-one-third to get the win, while Myers pitched the final two-thirds of an inning.

The Rams cranked out 11 hits. Askew’s 4-for-4 also produced four RBI. Peterson had two hits and five runs-batted-in. Stevens, Glover, Barkley, Porter, and Myers had one hit each.

Ridgecroft raises its record to 9-2 overall and 9-1 in conference with their second win since a surprise loss to Hobgood. The Rams are off until they play at Community Christian on Apr. 15. Albemarle falls to 4-5 overall and an even 4-4 in conference play.