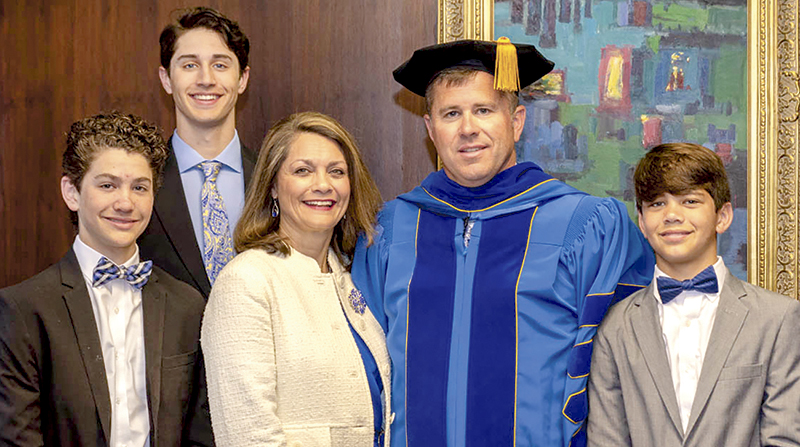 MURFREESBORO – Kirk Edward Peterson was inaugurated as the 23rd President of Chowan University on April 4. The inaugural convocation was held in Turner Auditorium of McDowell-Columns Hall.

Dr. Peterson’s inaugural address was full of excitement for Chowan’s future as he accepted the mantle of the presidency. He looks forward to continuing the university’s faith-based legacy in the world of higher education and providing students with the support they need to grow into the futures that God has planned for them.

“It is my job to make certain that we are united in our passion to ensure that our students lead meaningful lives of lifelong learning, service to one another, and leadership with their heads, hands, and hearts,” stated Dr. Peterson.

He considers keeping Chowan’s focus on the students to be the best way to honor those who built the university and the ones who continue to support it.

“I know that Chowan is family—and family is everything. It is good to be home,” Dr. Peterson concluded.

The processional of delegates from institutions of higher education and learned societies, university faculty, and presidential platform participants was led by the Chief Faculty Marshal and Mace Bearer Dr. Jennifer Zak Place, Chair, Department of Psychology.

Chair of the Board of Trustees W. Frank Rose, Jr. offered the welcome and Cecil S. Hollomon, Jr., trustee and chair of the presidential search committee, delivered the Call to Purpose.

Following the invocation, given by Mari E. Wiles, Minister to the University, attendees were led in the national anthem by Dr. Benjamin Thorburn, Associate Professor of Music. Dr. Cynthia Nicholson, Dean of the School of Arts and Sciences, led audience members in the Litany of Commitment; Dr. Keith Reich, Chair, Department of Religion read Psalm 1 from the Old Testament; and Thomas E. Forbes read the New Testament Gospel of John 3:16-18.

The Greetings for the Occasion were brought by A. Hope Williams, President, North Carolina Independent Colleges and Universities from the higher education community; Larry Hovis, Executive Coordinator, Cooperative Baptist Fellowship of North Carolina from the Christian community; Hal R. Thomas, Mayor of Murfreesboro from the local community; Shakendra Peay, President, Student Government Association from the Chowan students; Danny B. Moore, Provost and Vice President for Academic Affairs from the faculty and staff; and Elaine E. Myers, Alumna, Trustee, former Trustee Board Chair from the Board of Trustees.

After the greetings, M. Christopher White, Chancellor, Chowan University, presented the Challenge from the Chancellor, “Faith in Your Future.” In this, Dr. White challenged Chowan’s twenty-third president to continue the university’s growth and also offered insights from his own experience as a university president.

“Realize that any success the university will have under your leadership is due to the Lord’s will; you are simply the instrument through which the Lord will work,” said Dr. White.

He followed this advice with scripture from the book of Micah, “And what does the Lord require of you but to do justice, and to love mercy, and to walk humbly with thy God.”

The Challenge was followed with a performance of “Festival Sanctus” by the Chowan Singers, led by Dr. Thorburn and the Presentation of the Presidential Medallion, presented to Dr. Peterson by Frank Rose.

Attendees were led by Dr. Thorburn in the Alma Mater and the ceremony was brought to a close by Richard L. Pein, Professor Emeritus of Exercise and Sport Science, University of Wisconsin-LaCrosse, who gave the closing prayer.

Peterson was named president of Chowan University by the Board of Trustees on Feb. 15, 2018 and assumed the office on June 1.

No stranger to Chowan, he first served the University in 2004 as chair of what is now the Sport Science and Physical Education department. Throughout his tenure, he also served as Assistant Dean for Academic Affairs and as Assistant Provost.

After saving Urbana University from absolute closure, Dr. Peterson became superintendent of two private schools in Ohio. His breadth of experience as both faculty and administrator in higher, secondary, and elementary education uniquely prepares him to lead Chowan University.

Dr. Peterson believes in educating and nurturing students in a student-centered environment by placing great instructors and staff members in front of students and providing opportunities through thorough and demanding curricula that celebrate the exceptionality of all students. He feels that education should promote safe, yet challenging, environments for students to grow academically, personally, socially, intellectually, emotionally, physically, and spiritually.

Part of Dr. Peterson’s vision for Chowan is to continue the effort to recruit and retain students as well as growing and improving the physical plant. He has a desire to work with the faculty to bring in innovative academic programs and work closely with the students to gauge their feelings and listen to their needs.

Previously a member of the River of Life Christian Center, Dr. Peterson is now a member of Murfreesboro Baptist Church. He and his wife, Rachel, met as neighbors in Prattville, Alabama and have since been married for 23 years. Dr. and Mrs. Peterson have three sons: Caleb (19), Cody (16), and Justin (13). The Petersons enjoy traveling together as a family and spending time out at the ballfield with their sons.