MERRY HILL – Lawrence Academy’s softball team continued their march through the Tarheel Independent Conference here on Thursday by easily dispatching Hobgood Academy in a double-header by scores of 9-1 and 12-2. 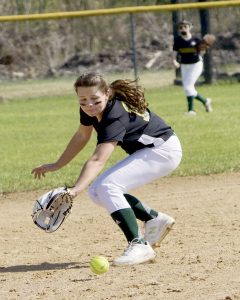 Lawrence Academy’s Isabelle Phelps backhands a hard-hit ground ball in Thursday’s softball doubleheader with Hobgood Academy in Merry Hill. The Lady Warriors swept the twin-bill for their ninth win of the season and seventh in conference. A.A. Imaging / Andre Alfred

The second contest was played as a home game for the Lady Raiders.

An early lead helped Lawrence triumph 9-1 in the first game thanks to seven big runs in the first inning. After Hobgood tallied their first and only run of the game, the Warriors scored all their runs in the inning on just one hit. They scored on a walk by Bailey Dunlow, another walk, an error, a passed ball during Claire Dail‘s at bat, a hit batter, and a single by Megan Stotesberry, all in the first inning.

Isabella Conigliaro was the winner in the pitcher’s circle for the Warriors. She went five innings, allowing a run on four hits and striking out four.

Jenny Tutor went 2-for-3 at the plate to lead Hobgood in hits.

Lawrence fired up the offense in the first inning of Game-2 when Rebecca Goodwin’s RBI single scored Megan Stotesberry and Goodwin came around on a base-hit by Samantha Hughson for a 2-0 Lady Warriors lead.

After Hobgood halved their deficit with a run in the top of the second inning, LAW tacked on two more runs. Conigliaro scored when Goodwin reached on an error and another error produced another Warrior run for a 4-1 lead.

Four runs came across for the Warriors in the third: two on a double by Goodwin, Stotesberry drove in one, and the fourth run scored on an error.

The Raiders got another run in the bottom of the fourth before Lawrence tallied four more runs in the fifth inning. Hughson, Lauren Smith, and Hailey Barnes all drove in runs in the frame.

Megan Stotesberry got the win for Lawrence, going five innings, allowing two runs on two hits and striking out four.

Mary Lindsey Harris took the loss for Hobgood. She allowed 15 hits and 12 runs over five innings, striking out two.

Lawrence had 15 hits in the game. Stotesberry and Hughson had three hits apiece. Conigliaro and Goodwin also had a multi-hit game with two hits each, and Hailey Barnes, Dunlow, Dail, Lauren Smith, and Brianna Faulk collected one hit each for the game.

Harris went 2-for-3 at the plate to lead Hobgood’s hitting.

It was Lawrence’s fourth win in a row, raising their record to 9-2 and 7-0 in league play. The Warriors travel to Terra Ceia Christian on Monday before their next home date with Northeast Academy on Thursday.