WINDSOR – Adhering to comments made during the public hearing at the first reading, Bertie County Commissioners at their April monthly meeting on Monday discussed changes made to the proposed Bertie County Road Safety and Maintenance Ordinance.

The changes, deemed ‘insubstantial’, meaning they would favor anyone who would challenge the ordinance in court, were made after that public input.

Since there was no unanimous vote in March, the fate of the ordinance now fell under the 100-day umbrella in which the Commissioners could look at the ordinance and vote again on whether to allow, under law, a 45-day grace period in which to bring it up a third time and act upon it. Unlike the first vote, the vote which took place Monday night did not have to be unanimous. 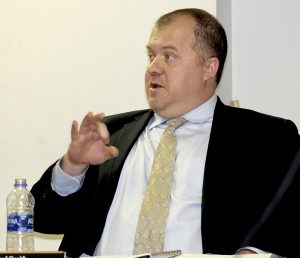 Indications of a 2-2 split vote seemed evident at the March meeting where Board chairman John Trent was absent.

However, Trent was present for this second reading, and voted with Commissioners Ron Wesson and Greg Atkins to proceed with the 45-day grace period before the Board taking any further action. Commissioners Ernestine Bazemore and Tammy Lee voted against proceeding with the ordinance as written.

Attorney Cliff Smith, of the Windsor law firm of Pritchett and Burch, represented the county in the updated wording of the ordinance, pointing out the changes made were insubstantial thanks to a ruling by the state Supreme Court.

“These changes were made on recommendations I received on certain things that were brought up in the last meeting,” Smith said. “It allows for changes to benefit anyone who would challenge the ordinance.”

The primary changes were mainly two-fold: first, a reduction in the fine the county would impose if a landowner had not made repairs to a road deemed unsafe. The county may still file an action against the landowner in court, but the amount of the fine potentially imposed fell from $1,000 per day to $100 per day during the time period following the 45-day reprieve.

The second major change was the addition of an eight-step administrative appeal process for landowners who have been cited for repairs; an entire Section 402 of the ordinance.

“It allows them to challenge an initial determination made by you and to bring it before you guys (Commissioners) first on whether it is out of compliance,” Smith stated. “That benefits the citizens.”

There was also clarification on the criminality of the statute.

“It was my understanding when I originally drafted it the intent of the Board was not to have it applied in a criminal manner,” Smith reiterated. “So, the Board has the power for this to be, or not to be, applied as a misdemeanor.”

Smith said the changes reflected some of the concerns the public expressed during the March public hearing, and those changes favored the public in allowing an appeals process, lowering the fine, and taking away the criminality. That, he said, eliminated the need for a second public hearing.

Lee asked if this was a nuisance abatement ordinance, because information she had received from the UNC School of Government in Chapel Hill said this ordinance would not qualify.

“An ordinance doesn’t have to fall under one category,” Smith explained. “It can be numerous things. The county has the authority to go out and correct a nuisance, but that’s not how this ordinance is written.”

Bazemore, in explaining her stance, said there were still too many unknown variables.

“I don’t believe Bertie County can afford to fix private roads, because where would you stop; there’re a whole lot of holes in the roads in this county,” she said.

Trent cited the eight-step appeals process, reading each for the record.

Wesson said there had been examples of road repairs in his district where landowners and tenants compromised, and other examples where nothing was done.

“It’s those who don’t take action that we must have a way of dealing with,” he cautioned.

Wesson then made a motion to introduce the ordinance, with the latest changes, seconded by Trent and the crucial vote took place, 3-2, along lines indicated.

So, within 100 days from April 1, the ordinance can be brought up again at another Commissioner’s meeting for a vote on enacting it.

Following other business on the Commissioners’ regular agenda, several citizens who had spoken for, and against, the ordinance made more public comments. Opponents questioned everything from the process to the ordinance’s very definition.

Among the proponents, Nancy Lee, a Kelford resident who lives on Cherry Lane, brought a video of a road in her neighborhood which appeared to be in a state of disrepair.

“You don’t know what it’s like until you put yourself in this situation,” she said. “I wouldn’t want this to happen to me, or my family member if something goes down. Put yourself in the other person’s shoes; then, you’ll be more likely to reach out and help.”