JACKSON – The Clerk to the Board was fired here on Monday, Apr. 1 at the same Northampton County Board of Commissioners meeting where another long-time employee resigned. 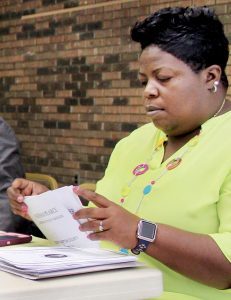 Komita Hendricks is shown here sorting through paperwork at a July, 2018 meeting between the Commissioners and the Northampton Board of Education. File Photo by Holly Taylor

Despite having a vote of confidence from the Board less than two months ago, Clerk Komita Hendricks was terminated from her full-time position by a full vote of the Board. Three days later, Hendricks was dismissed as a part-time Administrative Assistant. She was notified of that decision in a letter sent Apr. 4 by Robert M. Murphy, Northampton County Interim Manager.

In that letter, a copy of which was obtained by this newspaper, Murphy cited the reasons for the dismissal as “unacceptable personal conduct” as defined in the Northampton County Personnel Policy.

Murphy stated in the letter to Hendricks, “It is my finding that the specific reasons for your dismissal were your willful actions taken in your capacity as an administrative assistant to the Office of the County Manager to disseminate and improperly disclose confidential closed session audio recordings of the Northampton County Board of Commissioners and your knowledge of such closed sessions to third parties, including other county employees who had no business, reason or authority to have access to the recordings or knowledge of the closed sessions. Your improper actions were corroborated by other county employees and, in my judgment, you failed to negate or adequately explain your behavior during your pre-disciplinary conference.”

The letter also advised Hendricks that she had a right to appeal this decision in accordance with the county’s Personnel Policy.

The move to dismiss Hendricks came not long after the Board had renewed her contract. At the Jan. 7 meeting, the Board opted to renew the clerk’s contract for a period of three months while the new board members look over the job description and consider accountability.

At the Feb. 18 meeting, Chairman Charles Tyner asked what the Board had decided to do in regards to the clerk’s contract. Commissioner Kelvin Edwards motioned to extend the contract to a full year “for her faithful and dedicated service.”

The motion at that meeting was unanimously approved. Afterwards, Tyner thanked Hendricks for her work and her support.

County Attorney Scott McKellar said the Board had not yet named anyone to fill the Clerk’s position.

Also at Monday night’s meeting, the audience learned of the voluntary resignation of Northampton Human Resources Director Marcenda Rogers. She was hired in that capacity on Oct. 15, 2003. Her resignation was effective this past Sunday, March 31. 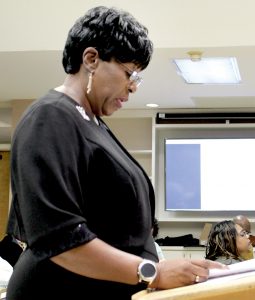 Marcenda Rogers announced her resignation as HR Director on Monday night before lashing out at the Northampton Board of Commissioners. Staff Photo by Holly Taylor

Rogers was in attendance at Monday’s meeting and signed up to speak during public comment.

“I have been a dedicated employee of Northampton County for 15 years and have seen and gone through some tough times,” Rogers stated, “however, I have never seen so much turmoil in a work environment. I can no longer work in the midst of confusion, dishonesty, deceitfulness, and disrespect.”

Rogers mentioned other county resignations since December 2018 which have included Finance Officer Leslie Edwards and County Manager Kimberly Turner. She also said other employees have opted to retire or are seeking employment elsewhere.

“This is a tremendous loss of seasoned and dedicated employees,” she said. “The county is losing its most valuable asset.”

“It has been stated by the Chairman [Charles Tyner] that no items be brought before the Board if all are not in agreement,” she continued. “How is that possible when any discussions and transacting of public business should be done in an open meeting?”

In her remarks, Rogers requested a copy of emails, texts, and group chat correspondence “whereby county business is being discussed and/or transacted from Jan. 3 to present” because she noted some commissioners tend to use their cell phones during meetings.

“What happened to transparency,” she asked.

Rogers continued with several more questions while addressing the board. Those included questioning why the county hired a CPA firm for a second time, how much money was appropriated for courthouse security and the former DSS building projects, what was the cost for the relocation of the Board meeting room, and if all current elected officials live in Northampton County.

“Citizens, please do not be fooled by the smoke and mirrors,” Rogers said, urging people to ask questions themselves.

She concluded her public comment by quoting Psalm 101:7, “No one who practices deceit will dwell in my house; no one who speaks falsely will stand in my presence.”

The Board did not make any comment in response. Their customary policy is to respond to any questions in writing.

McKellar told the News-Herald that the Board had received advanced notice of Rogers’ resignation. He said the Board would respond to her comments “in due course.”