GASTON – Details are scarce at this point regarding a double shooting that occurred near here earlier this morning (Wednesday).

Northampton County Sheriff Jack Smith told the Roanoke-Chowan News-Herald that a male and a female were shot at a residence on Dr. Hall Road, located off NC 46 three miles west of Gaston. 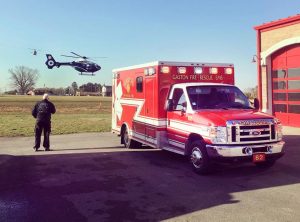 One medical helicopter takes off while another waits to land this morning in Gaston following a double shooting that occurred near this Northampton County town. Photo courtesy of Gaston Fire-Rescue-EMS

The two victims were transported to the landing zone at Gaston Fire-Rescue-EMS from where they were airlifted to a regional medical facility.

Smith said he was not aware of how seriously they were injured in the shooting.

“All I can confirm at this point is that two individuals were shot and are in the hospital,” Sheriff Smith stated.

He added that the North Carolina SBI will assist the Northampton Sheriff’s Office in its investigation.

“We along with the SBI are actively working this case as we speak,” Smith said at 1 p.m. today.

The exact time of the shooting is not known at this point. The only timetable provided came from a message sent to this newspaper and other media outlets by Gaston Fire-Rescue-EMS, saying they responded to a double shooting at 7:33 this morning on Dr. Hall Road.