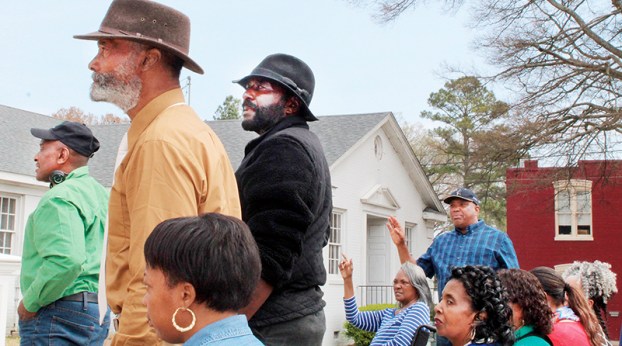 JACKSON – “Where is the justice?”

Tony Burnette, President of Northampton County’s NAACP, posed this question to the people gathered on the courthouse steps in Jackson on Mar. 30. That question along with many others remains unanswered.

Burnette was just one of a few speakers at the annual prayer vigil held for missing people in Northampton County. Family of the missing along with community supporters and some law enforcement came together on Saturday to raise continued awareness of the ongoing cases and share the story of their missing loved ones.

Shawn Alston of Garysburg was last seen on Oct. 18, 2012 as he went to visit a friend’s house. Almost seven years later and he has not returned home.

Daniel McCoy Moses from Rehoboth disappeared on June 16, 2011, the same day the house he lived in—which had been built by his grandfather—burned to the ground. It has been almost eight years since his family has seen him.

Robert Moore, a former teacher at W.S. Creecy School, went for a walk one day in 1996 and never returned home. It’s been 23 years since he vanished without a trace.

Phyllis Lorrain Powell was only five years old when she went missing from her home in Woodland on Jan. 11, 1963. Her family has been searching for answers for 56 years.

All four were remembered on Saturday.

Shelia Moses, sister of Daniel, opened the event with an emphasis on the commitment to continuing the search. She recognized the family members in attendance by asking them to stand.

“That’s too many people,” she said of the families who stood up. “Even one person is too many.” 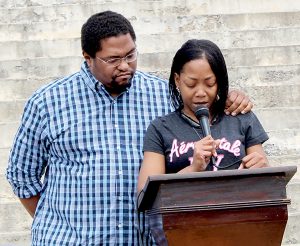 After an opening prayer from Rev. Andrew West, Burnette stepped up to the podium to speak for a few minutes. This was the fourth year he said he’d attended the vigil.

“If it was your family member, what would you do,” he said as he asked people to imagine what it was like to experience what those families had experienced. “You can’t move forward when you’ve got a loved one that’s missing.”

He noted that one of the things the four missing people have in common is that they are black. But their lives and their families’ lives still matter. He also asked law enforcement to keep looking at the cases and remember the families who are waiting.

“We will visit these courthouse steps every year if it takes that long to keep people woke because next time it may be you,” he continued. “Now is a time for action. Somebody out there knows something.”

The families of the missing also had a chance to speak.

“After all these years, I still haven’t given up my search for her, for answers,” said William Powell, brother of Phyllis. “Even though it seems as if she vanished without a trace from what I thought was a close-knit community. I still haven’t given up hope that one day I will find her or she will find her way back to her family. All I know is that on that mild winter day, either she walked away or someone took her and lost their way doing so.”

He too asked people to do the right thing and contact law enforcement if they had any information for any of the cases.

“A light should be shined on this dark mystery along with other missing persons from our community,” Powell continued.

Powell also recognized that there are many “lost” people in the community, even if they are not physically lost. Drugs, gangs, and crimes make many people lose their way, he said.

“Even if you do not have information to help me find my little sister Phyllis and others to find their loved ones, I ask you to help your brother who’s lost, your sister who’s lost, your mama, your grandmama, your nephew, your niece,” he urged. “Help that neighbor. Help them find their way home, back to the person they can be and the place they belong. Together we can make a difference.”

Shawn Alston’s cousin, Stacey Alston, spoke on behalf of her family. Shawn’s mother, Lola Robinson, as well as his younger sister passed away within the last few years still waiting for answers.

“We all grew up together,” Alston said, becoming visibly emotional as she recalled memories of Shawn. “He was always there for his mom. Whenever she was in need, he felt like it was his job to help her out. He was especially a caring brother to his sister who had special needs. He had a special place in his heart for her.”

When Shawn went missing, Alston said, “no one wanted to believe that this could be happening. Things like this don’t happen in the small area we live in. You always see this stuff on TV and the newspaper.”

Alston explained that Lola Robinson searched tirelessly for her son, holding fundraisers and marches and rallies to raise awareness. She even helped with efforts to put up a billboard with the faces of the missing.

“It took a toll on her health,” she continued. “She left this world not knowing what happened to Shawn. She should never have gone through something like that.”

Alston wrapped up her words by urging people, like the others had, to speak up if you know anything about the cases. She said their family was just looking for closure.

Moses spoke briefly on behalf of the Robert Moore family, noting that Moore’s son had passed away too.

“There’s no one here to speak for him today,” she said before she asked former students of W.S. Creecy School to stand up in memory of Moore. “We are Mr. Moore and we stand for Mr. Moore today.”

Moses then spoke about her brother Daniel who disappeared on “the worst day of our lives.” She too noted that some family members had passed on while waiting for answers. She said she will continue to return each year until her brother is found and the others are found.

“Four black people are missing in Northampton County and the FBI does not consider this a federal case,” Moses said, urging law enforcement to look closer at each missing case.

Burnette concluded the vigil with a closing prayer, asking everyone to form a circle and hold hands.

The message was loud and clear: don’t give up the search to find answers.

RICH SQUARE – The work of the Down East Drug Task Force not only took an alleged drug dealer off... read more