MURFREESBORO – Visitors to Murfreesboro will soon have a little extra guidance.

The Murfreesboro Chamber of Commerce has been working to add some additional signage in order to let visitors know what the town has to offer. Chamber Director Daryl Williams provided an update to the Town Council at their regular meeting here on Mar. 27.

Williams first presented the idea to the Council back in October, explaining the “wayfinding signage program” would let travelers know Murfreesboro is a place to stop for things like food, gas, or visits to the historic district and Chowan University. Five signs in total would be located on the highways at DOT-approved entry points around the town.

Originally, a private donor was going to cover the cost of these signs. 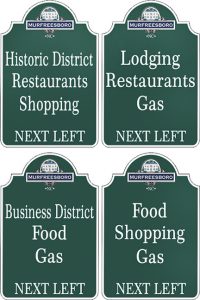 These new signs have been approved to erect at DOT-approved entry points to Murfreesboro. Contributed Photo

In his most recent update, Williams said he was approached by Chowan University because they were interested in supporting the wayfinding signage project as well. Because of that, the proposal expanded to add two more signs within the town itself. These two would point people in the direction of Town Hall, the police department, and the university.

They will still receive a $250 donation from a private donor, but Williams suggested the remaining cost be split three ways. The Town, the Chamber, and Chowan University would all pay $358.33 each.

Williams answered the signs will be made out of aluminum. He also noted they would be reflective—a change from the original design.

Council member Craig Dennis suggested the Town could use money from the Beautification fund to pay their share of the cost. Town Administrator Carolyn Brown confirmed there was money in that part of the town budget available as well as some funding left over for special events if necessary.

Mayor Hal Thomas asked if they would need assistance from the Public Works department to put up the signs, and Williams answered yes.

With all questions answered, Theodorakis motioned to approve the funding for the new signage, and Council member John Hinton seconded. The vote was unanimously in favor.

Williams said he would proceed with ordering the signs.