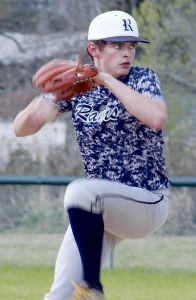 “I told them to go up there and swing away, and they hit,” said Rams coach Gary Stevens. “I wanted them to be aggressive at the plate and they were,”

The Rams smacked 11 hits and backed it up with a brilliant mound performance from Bryce Stevens in claiming the victory. Stevens and Zeb Askew combined to toss a one-hitter.

The Warriors opened the scoring with a run in the bottom of the first inning. Sawyer Mizelle drew a base-on-balls, stole second, and went to third on a Joseph “Cheese” White single ripped to centerfield. With runners on the corners, LAW coach Will Lane called for the double-steal, but the Rams sniffed it out. Mizelle looked to be picked off third base, but in the rundown the throw home was high and he managed to score on the error. Lawrence led it 1-0 after one inning of play.

Ridgecroft answered with five runs in the top of the second inning. Treyce Myers had an RBI single, Cody Peterson had a two-run single, Zeb Askew drove in a run, and Peterson scored as Askew was tagged out in a rundown between first and second base. The Rams led 5-1 after two innings.

Ridgecroft added two more runs in the top of the fourth inning. Stevens had an RBI groundout and Myers scored on an error, upping the Rams’ margin to 7-1 after four complete.

Ridgecroft scored its final three runs in the top of the seventh inning. Luther Glover smacked a run-scoring double, pinch-runner Keyshawn Taylor made a successful steal of home, and the final run scored on a wild pitch. Ridgecroft led it 10-1 headed to Lawrence’s last chance.

In the bottom of the frame, Gavin Smithwick walked, reached third base on back-to-back groundouts, but was stranded there when reliever Askew’s lone strikeout ended the game.

Stevens pitched five-and-one-third innings for the win allowing one run on one hit with 12 strikeouts. Askew pitched the final inning-and-two-thirds allowing no runs, no hits, and one strikeout.

Tayloe Powell pitched four innings and was tagged with the loss for Lawrence. Mizelle pitched two innings in relief and Evan Swain pitched the seventh.

“Cheese” White had Lawrence’s only hit of the game. Ridgecroft’s 11 hits were led by three from Askew, with two each for Peterson, Caleb Porter, and Jack Jones. Glover and Myers had one hit apiece.

“These guys aren’t afraid to play their position,” Coach Stevens added. “I think they enjoy the game because of the competition.”

“I told our guys we have to be mentally tough,” said Lane. “We’ve got to win every pitch and today, offensively, we struggled.”

Ridgecroft is 6-1 overall and 6-0 in the TIC. Lawrence falls to 4-1-1 and 2-1-1 in conference. The Rams’ next three games are at home: Terra Ceia tomorrow (Mar. 28) with Hobgood and Pope John Paul II next week. Lawrence played at Halifax Academy Tuesday before a return date with the Vikings at home next week along with a home date against Hobgood.