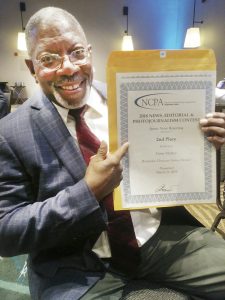 For the third consecutive year, the North Carolina Press Association (NCPA) has recognized the work of the Roanoke-Chowan News-Herald writer. His latest award – Second Place in Sports News Reporting – was presented March 21 during the NCPA’s annual Winter Institute held at the Raleigh Marriott – Crabtree Valley.

“What was so intriguing about the story is the fact that the state tournament site was moved three times due to extremely wet weather in mid to late July of last year,” stated Cal Bryant, Editor of the Roanoke-Chowan News-Herald. “Gene made sure that our efforts to follow this team were not deterred as we tagged along with Windsor Post 37 every step of the way, first in Manteo, the original site of the 2018 Legion State Tournament, to Winterville, where the heavy rain followed the teams, and finally to Asheboro where the Windsor boys won it all.”

The team of judges tasked with the job of separating the best from the rest called Motley’s story….“a good read with overall great photo and graphics presentation.”

“The rest of North Carolina now knows what we’ve known all along – Gene Motley is a talented journalist,” Bryant noted.

And Motley’s past work also speaks volumes as to his journalistic skills.

In 2017, Motley earned the highest honor in the category of City-County Government Reporting. His three-part series on the financial difficulties experienced by the Bertie County Public School system, and its plan to fix those problems, was judged as the first-place entry in that year’s NCPA contest.

Motley was also a first place winner in the 2016 NCPA Editorial and Photojournalism Contest for his work in writing serious columns.

“This year’s award in Sports News Reporting and the ones from 2017 and 2016 shows the broad range and depth of Gene’s work. From local government reporting, to editorial column writing, and now with sports, this guy can do it all,” Bryant exclaimed.

Only three winners are named in each category within each of six newspaper (print) divisions. The Roanoke-Chowan News-Herald competes in Division C (community newspapers with more than a 10,000 circulation).

The Roanoke-Chowan News-Herald is no stranger to winning awards from the NCPA.

In 2017, the RCNH news and ad staff combined to earn five awards. The year before (2016), this newspaper carried home 11 awards, its highest total ever in a single year. Four of those winning entries were judged in first place.

WINTON – Hertford County local government’s newest addition to its personnel policy is now officially on the books, but not... read more