MURFREESBORO – Dr. Kirk Edward Peterson will be inaugurated as Chowan University’s 23rd President on Thursday, April 4. The inaugural convocation will take place at 11 am in Turner Auditorium of the McDowell Columns Hall. 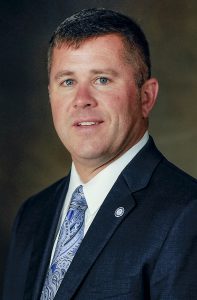 Dr. Kirk E. Peterson will be inaugurated as President of Chowan University during an April 4 event on the campus. Contributed Photo

The program will include personalities representing all aspects of the college constituency. The Call to Purpose will be delivered by Cecil S. Hollomon, Jr., Alumnus, Trustee, Chair of Presidential Search Committee; the Invocation will be delivered by Mari E. Wiles, Minister to the University; and The Litany of Commitment will be led by Cynthia S. Nicholson, Dean, School of Arts and Sciences. The Greetings for the Occasion will be brought from constituencies that include Hope Williams, President, North Carolina Independent Colleges and Universities; Larry Hovis, Executive Coordinator, Cooperative Baptist Fellowship of North Carolina; Hal R. Thomas, Mayor, Town of Murfreesboro; Shakendra Peay, President, Student Government Association; Danny B. Moore, Provost and Vice President for Academic Affairs; and Elaine E. Myers, Alumna, Trustee, Former Trustee Board Chair.

The Inaugural Address will be delivered by President Kirk E. Peterson to be followed by Richard L. Pein, Professor Emeritus of Exercise and Sport Science, University of Wisconsin-LaCrosse, who will deliver the Closing Prayer.

Peterson was named the twenty-third president of Chowan University by the Board of Trustees on February 15, 2018 and assumed the office on June 1, 2018. No stranger to Chowan, he first served the University in 2004 as chair of what is now the Sport Science and Physical Education department. Throughout his tenure, he also served as Assistant Dean for Academic Affairs and as Assistant Provost. Based on the needs of the institution’s service area, Dr. Peterson helped found Chowan University’s first master’s program and served as founding Dean of the University’s Graduate School, which offered the only Christian University Master’s Degree program east of North Carolina’s I-95 and the only Elementary Education Master’s Degree within a 60-mile radius.

Dr. Peterson believes in educating and nurturing students in a student-centered environment by placing great instructors and staff members in front of students and providing opportunities through thorough and demanding curricula that celebrate the exceptionality of all students. Dr. Peterson feels that education should promote safe, yet challenging, environments for students to grow academically, personally, socially, intellectually, emotionally, physically, and spiritually. Part of Dr. Peterson’s vision for Chowan is to continue the effort to recruit and retain students as well as growing and improving the physical plant. He has a desire to work with the faculty to bring in innovative academic programs and work closely with the students to gauge their feelings and listen to their needs.

For additional information regarding inauguration events or to make a reservation, contact the Chowan University Development Office at 252-398-1233.