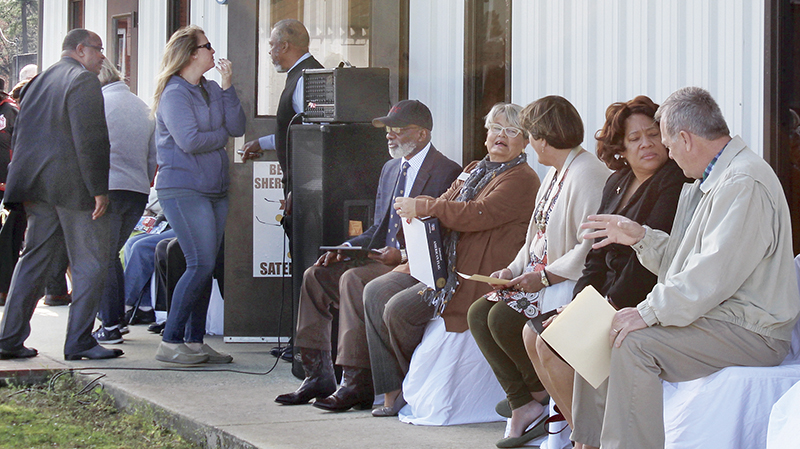 Dignitaries and guests gather in front of Powellsville Town Hall on Saturday, March 16 for the Centennial celebration marking 100 years since the small Bertie County municipality was incorporated in 1919. Staff Photo by Gene Motley

March 16 marked 100 years since the Town of Powellsville in Bertie County became an incorporated municipality.

Actually, there’s a little bit more to the story.

The precise date is March 6, the 16th just happened to be the date the town chose – and rightly so – to hold a birthday party. 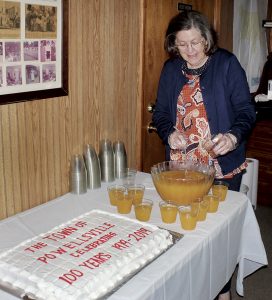 And there are, according to the astute eye of current 1st District NC House Representative Ed Goodwin, not one but two charters. As proof, Goodwin brought facsimiles of both to the celebration.

“I brought these to show you,” Goodwin said, as he held aloft what appeared to be yellowed parchment photocopies. “And, yes, they are the originals.”

Goodwin was just one of several dignitaries who traveled to a 100th birthday ceremony held at the Powellsville Town Hall last Saturday (March 16).

“This day is an especially noteworthy one,” said Mistress of Ceremonies Patricia Ferguson, a former Bertie County Commissioner. “This is a way to bring neighbors, family, and friends, young and old, town and country, together in historic fellowship.”

“We have been blessed to grow over the years,” said Bishop J.C. Watford during his invocation, and whose Rountree Temple of Praise casts an enduring shadow across the town from its nearby Moore Town Road location. “And as long as we remain, may we continue to live and grow together.”

James Peele, the first African-American mayor in the town’s history, offered a perspective on the celebration.

“We can be inspired by what was, and what was given us,” Peele intoned. “This is all the more reason to celebrate.”

Theophilus Garris, Jr. – son of the longtime educator at the former C.G. White School – also spoke on returning to his birthplace for the first time in over a decade.

“My father came here in 1943, and he used to rise at 4 a.m. to light the fires in the old wooden school, because he lived and breathed education,” the younger Garris humorously reflected. “Maybe 100 years from now they can re-name this road in his honor.”

Smith reminded the crowd that her state senatorial inauguration was held in Powellsville rather than in Raleigh, or her native Northampton County. She also brought a proclamation of celebration from the State Senate in the General Assembly.

Shepard presented to the town a U.S. flag, sent by Sen. Burr, that had once flown over the U.S. Capitol in Washington, DC. She also read a letter from the state’s senior senator.

Then, almost on cue during the bestowal, a loud piercing fire alarm went off and members of the town volunteer fire department were dispatched on a call. When the alarm ceased, she made a light remark about the interruption.

“This shows that you have endured perilous times, and you’re still standing strong,” Shepard acknowledged.

Following more proclamations and presentations, Mayor Peele and Town Council members Hattie Askew, Carlyle Hoggard and Gerald Waters, paid respects to the town’s citizens above the age of 90 – including centenarian Estelle Simons, one of the oldest residents of the town at age 101. These included L.T. Askew, Howard Brown, Lillie Morris, Dora Perry, Mamie Raynor, Ola M. and Kelly Saunders, Mamie Raynor, Ruth Watford, and Rosetta White, who acknowledged an aging brick building next to the festivities once thrived with several town businesses.

Afterward, the Mayor thanked the Centennial Committee – headed by Town First Lady Linda Peele – and everyone retired from the chilly morning to a display of special museum artifacts of the town’s history within Town Hall.

Some say history isn’t important as long as you live in the present, but when you reflect on your past you realize that’s not always the case.