AHOSKIE – For the past 22 years, Roanoke Electric Cooperative has spread its wings and soared to new heights through numerous innovative programs under the capable leadership of its President and CEO, Curtis Wynn. 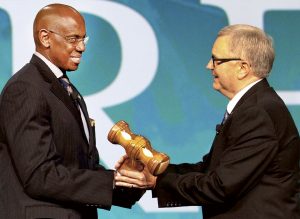 Now, the rest of the nation’s rural electric cooperatives will benefit from his ideas and his leadership.

At their annual meeting held March 7-13 in Orlando, Florida, the National Rural Electric Cooperative Association elected Wynn as the 39th president of its Board of Directors. It marked the first time in the national organization’s 77-year history that an African American has been elected to serve in this top leadership post.

“It’s a tremendous honor to serve as NRECA president in order to advance the work of Roanoke Electric Cooperative and the 900 electric cooperatives across the nation,” said Wynn. “The electric cooperative future is filled with opportunity, as well as with challenges. During my two-year term as NRECA board president, I will challenge the nation’s electric co-ops to embrace the rapid pace of industry transformation, to collectively strengthen our network, and to create even more opportunity for the people and rural communities we serve.”

As to his breaking the color barrier at the top level of the NRECA, Wynn stated, “It’s very humbling to have that opportunity. It’s a great opportunity for myself personally, but even far more an opportunity to expose our region of the nation. My greatest hope in this is that for those with reservations about an African American serving at this level, I hope that my work speaks for itself and not the color of my skin.”

Based in Arlington, VA, NRECA is the national trade organization that represents the nation’s more than 900 not-for-profit, member-owned electric co-ops, which provide service to 42 million people in 47 states.

Since 2007, Wynn has served as the NRECA board director representing North Carolina. In recent years, he has also carried out the roles of board vice president and secretary-treasurer. The association’s board of directors, representing each state, elected him to serve as president.

“I was chosen by my peers at the state level in 2007 to represent North Carolina on the NRECA Board,” Wynn stated. “They are a great group to work with….they handle all the federal lobbying, handle all the employee benefits, perform research to advance technology, and handle the majority of our training.

“The biggest impact has been the training,” he added. “What I’ve been able to absorb with that training has given Roanoke Electric a big leg up on what we’ve been able to do, especially over the past 10 years. They are very progressive in their training and we have benefitted greatly from their first-hand knowledge.”

A 55-year old Florida native, Wynn began his cooperative career washing trucks for his hometown electric co-op in Graceville. He soared through the professional ranks at West Florida Electric Cooperative and went on to serve in various management positions there. In 1997, he moved to North Carolina to assume the post as Roanoke Electric Co-op’s president and CEO, where he has led the co-op to be recognized as one of the most innovative electric cooperatives in the country.

In 2015, Wynn spearheaded the co-op’s launch of a more nimble and efficient approach to strategic planning and execution, for which the co-op was inducted into Touchstone Energy Cooperatives Palladium Group Balanced Scorecard Hall of Fame in 2017. That same year, NRECA awarded Wynn the electric cooperative industry’s highest honor for innovation and excellence in communication, the J.C. Brown CEO Communication Leadership Award. Also in 2017, Wynn and the co-op’s board of directors won the national association’s William F. Matson Democracy Award for outstanding accomplishments and service to rural electric cooperatives through political action, education and participation.

“Strong leadership is essential to helping NRECA and the entire cooperative family navigate the many opportunities and challenges facing our industry,” said NRECA CEO Jim Matheson. “Curtis is an extremely thoughtful and capable leader, and I’m looking forward to his continued leadership as president.”

In addition to his role at the co-op, Wynn sits on a number of national and local boards, including the North Carolina Association of Electric Cooperatives and as past president, vice president and secretary-treasurer for the North Carolina Electric Membership Corporation. He is also on the board of directors for The National Rural Utilities Cooperative Finance Corporation, a non-profit finance organization serving the nation’s electric co-ops.

Roanoke Electric Cooperative provides service to 14,500 members in Bertie, Hertford, Halifax, Northampton, Gates, Perquimans and Chowan counties. Chartered in 1938 to provide light and power to farms, the co-op today serves as an engine of economic development and provides educational, recreational and community assistance services to enhance the quality of life of its member-owners throughout the diverse communities it serves.