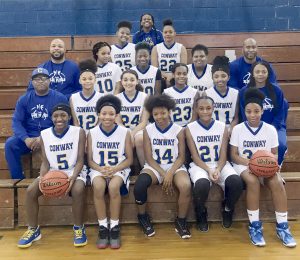 “Anyone whom looked upon the fourteen young ladies the first day of practice in December of last year would not have envisioned that these ladies would have the most amazing, historical season in the history of Conway Middle School girl’s basketball,” said head coach Tyrone Powell.

The team finished the season with an amazing record of 17-2, including a pair of wins over Chaloner Middle School of Roanoke Rapids, who had dominated the conference the past few years, and were undefeated until they lost twice this year to Conway.

“As impressive as the 17 wins are, it was the faith these young ladies displayed during the season that permitted them to accomplish the phenomenal feats they did,” continued Powell.

“The Bible says in Hebrews 11:1 that ‘Faith is the substance of things hoped for and the evidence of things not seen’,” noted Powell.

The girls hoped for a winning season but based on history, it wouldn’t be seen.

“The ladies adopted that platform that everything they accomplished this season would be due to God and they would give God glory for the marvelous things He would do,” Powell said.

The team opened the season defeating Weldon Middle School 20-7 which began a streak of wining four consecutive games. The first loss of the season came at the hands of Chaloner on Jan. 14.

“The team experienced a lost on the court but their faith was not shaken,” Powell acknowledged. “They got back to work the very next day and won the next six games. It was becoming evident within the conference that Conway was a force to be reckoned with.”

“On paper, the ladies weren’t the most talented team but in their hearts, they were the best team in the conference and it showed through every game,” he admitted.

Conway’s second loss came at the hands of Halifax County Prep, a loss that would eliminate the team from contention as regular-season champions but played a role in one of the biggest wins in the school’s history.

Conway won its next game and then faced Chaloner on Feb. 13 and gave the Yellow Jackets their first loss of the season. The team closed out the regular season with four consecutive wins and entered the conference tournament as the number-two seed.

“The ladies won their first and second round games, outscoring their opponents 63-29,” Powell revealed.

The championship game featured the top two seeds, Chaloner vs Conway. Through facing and conquering of all sorts of adversity on and off the court throughout the season, the team had another opportunity to seize the moment.

“The ladies took full advantage of the opportunity,” Powell declared. “Conway led the entire championship game and during moments when momentum would shift, the ladies relied on their faith to will them through.”

Conway will have seven members moving on to Northampton High School next year and return a solid core of seven members for the 2019-2020 team.

“We may not know what next year will bring but this year’s team showed everyone that all things are possible to those who believe,” Powell concluded.

AHOSKIE – It was the only points she made the entire game, but they were huge. Ahoskie Christian School’s Cameron... read more