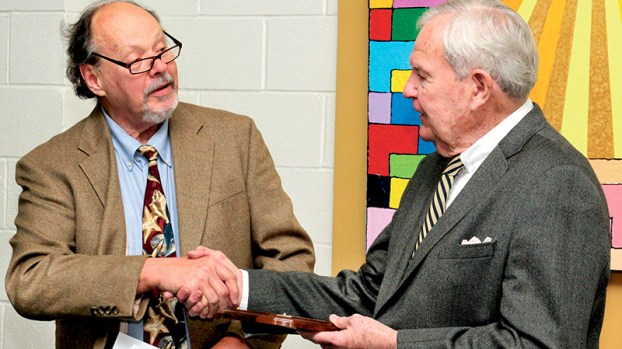 Richard “Dickie” Hoggard (right) is congratulated by David Barnes on his retirement from nearly 20 years of service to the Ahoskie Food Pantry. Staff Photo by Cal Bryant

Heart of a volunteer

AHOSKIE – He has been the “face” of the Ahoskie Food Pantry for nearly 20 years.

Chances are abundantly high for those making donations to the local organization to have their photo taken with Richard “Dickie” Hoggard. He is perhaps the all-time leader when it comes to having his photo published in the Roanoke-Chowan News-Herald.

But it nearly didn’t turn out that way as it was a unique happenstance that turned the Lewiston native into one of the Food Pantry’s biggest supporters.

“My wife (Becky) and Lois Sawyer were volunteers with the Food Pantry and one day I had to fill in as a substitute….the rest, as they say, is history,” Hoggard said. “I’ve really enjoyed being a part of this great organization. With the kind and open hearts of a great number of individuals, local churches, schools, civic groups and other organizations, to include the Boy Scouts, this Food Pantry has well served those in need for a number of years.”

Hoggard was honored on Sunday, March 10 during an event held in his honor in the Parish Hall of St. Thomas Episcopal Church. He and his wife are moving to Chapel Hill for their retirement. 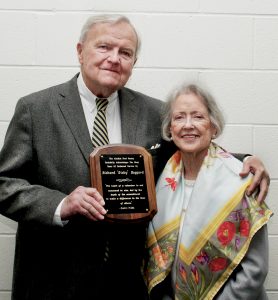 Dickie Hoggard is pictured with his wife, Becky, while holding the plaque of appreciation. Staff Photo by Cal Bryant

“We’re saying goodbye to a person who has been a stalwart here in our community,” stated Rev. Jeff Douglas of St. Thomas Episcopal. “Dickie and Becky will be greatly missed. They are both very sweet people who have served this community and the Food Pantry very well over the years.”

David Barnes presented Hoggard with a plaque honoring his years of service to the Ahoskie Food Pantry.

“We thank Dickie for his tireless and faithful service,” said Barnes, noting that Hoggard began volunteering at the Food Pantry in 2002. “Think for a moment about all those numerous cans full of donated food having to be sorted through and placed on the shelves one-by-one. That gives you a glimpse of all the time that Dickie has spent trying to help others.”

Barnes noted that under Hoggard’s leadership, the Ahoskie Food Pantry has been able to keep pace with growing demand.

“This past year we served 950 families in need,” Barnes said. “Dickie told me just the other day that of all the volunteer work he has done over the years, his work at the Ahoskie Food Pantry remains as the one closest to his heart.”

The plaque awarded to Hoggard reads: “The Ahoskie Food Pantry gratefully acknowledges the many years of service by Richard “Dickie” Hoggard. The heart of a volunteer is not measured in size, but by the depth of commitment to make a difference in the lives of others.”

Hoggard, in accepting the accolade, shared with the audience four things he held dear.

“First of all my wife of 64 years, Becky,” he began. “The others are St. Thomas Episcopal Church, the Ahoskie Food Pantry, and my friends. I love ya’ll and will miss ya’ll a lot.”

Hoggard’s retirement leaves a pair of big shoes to fill at the Ahoskie Food Pantry.

“We will definitely miss him; we’ve enjoyed being around him so much,” said Carolyn Arrington, also a veteran volunteer at the Pantry. “Dickie loved volunteering; he was always friendly and always had a smile on his face for those who came to the Pantry for help.”

Arrington added that while Hoggard did indeed serve as the face of the Pantry through all the photographs taken of him accepting donations, he also worked hard behind the scenes.

“He always liked sorting through the food and stocking the shelves. He also kept things neat and orderly,” she concluded.

AHOSKIE – For the past 22 years, Roanoke Electric Cooperative has spread its wings and soared to new heights through... read more