JACKSON – The decision was not unanimous. But in the end, the school board had enough votes to accept the resignation of Dr. Monica Smith-Woofter, the superintendent of the Northampton County school district, at their meeting held here Monday night. 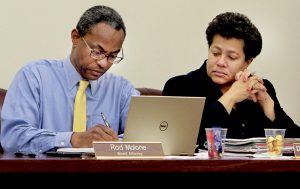 Dr. Monica Smith-Woofter looks on as attorney Rod Malone jots down some notes at Monday night’s meeting of the Northampton County Board of Education. Staff Photo by Holly Taylor

After their regular open session meeting, the Board of Education members entered into a closed session which lasted almost two hours. This was in addition to a closed session held earlier in the evening to discuss personnel as well as a special called meeting held on Feb. 26.

When the Board returned to open session, Chairman Clinton Williams stated they were going to make a final decision about what they had discussed in closed session. Board Attorney Rod Malone explained there would be a motion to accept a resignation agreement between Dr. Smith-Woofter and the Board of Education.

Richie Harding motioned to accept the resignation and Rhonda Taylor seconded. The letter of resignation stated it would be effective on March 31.

There was some discussion before a vote was held.

Williams suggested the Board consider continuing the superintendent’s contract until May 31 instead.

“The superintendent has been with us for a number of years now, and I think has done a good job for our district in her leadership role,” he said. “Right now, we are in a position where we are about two months out from testing our students. If the superintendent should go ahead and leave us at the time that is indicated [March 31], it will upset, it would disrupt, it will slam our academic milieu.”

“I think it’s going to cause a major disruption in instruction. Change is hard, it’s always been hard,” he continued. “I would like to see the superintendent contract end not earlier than May 31 when our End of Grade, End of Course testing has been conducted.”

“Change in leadership at this time in the school year will have an effect on the students as well as our staff,” she said. “I’ve heard the comments about the good things the superintendent is doing, and we need to acknowledge that and encourage her to not resign at this time.”

Edwards also thanked Dr. Smith-Woofter for the work she had done in moving the school system forward during her tenure.

When asked if he would amend his motion to extend the resignation date to May 31, Harding simply answered no.

The only other board comments before the vote were from Taylor who thanked Dr. Smith-Woofter for her work.

“The [Northampton County] Early College was one of the most impactful contributions that you’ve had as well as your grant writing. I just want to say thank you for that,” she said.

The vote on Dr. Smith-Woofter’s resignation was 3-2.

Harding, Taylor, and Marjorie Edwards voted in favor of accepting her resignation effective March 31. Williams and L. Edwards voted against.

Board member Lloyd Pitman was not present for the meeting to cast a vote, and Dr. Keedra Whitaker—who was present for the earlier open meeting and closed meeting discussion—did not return to the table to vote.

After the vote, Dr. Smith-Woofter took a moment to reflect on her time with the school district.

“I appreciate having been here in Northampton County,” she said. “I was a student and a graduate. It has certainly been a pleasure to serve my students, my staff, and my community. It’s a privilege to have been given the opportunity. It will be a lifelong experience that will last in my memory forever, and I certainly want to thank you for the opportunity.”

Dr. Smith-Woofter began her career in public education with Northampton County Schools in 1986 as a bus driver and substitute teacher. Later she served as a mathematics teacher and a coach before her transition to superintendent in July 2014.

Her original contract with the Board of Education ran from July 2014 to June 2018.

According to a press release from the school district, Dr. Smith-Woofter has secured over $1.6 million in competitive grant funds since 2014. She also worked to support year-round afterschool/summer student programs, opened the Northampton County Early College, and improved students’ academic growth and grade level proficiency.

The teacher attrition rate and dropout rate are the lowest they have been in six years, and the results of the Teacher Working Conditions district survey are at an all-time high, improving from 62.9 percent in 2014 to 86.5 percent in 2018.

In 2018, she was chosen as the recipient of the Brad Sneeden Leadership Award.

The press release stated Dr. Smith-Woofter would be pursuing other job opportunities and “plans to continue her work in transformational reform efforts promoting continuous school improvements across the state.”

“She will be missed,” said Assistant Superintendent Doug Miller, speaking to the News Herald Tuesday morning. “She’s been a great leader for the district.”

Miller spoke highly of his colleague and said he was “very surprised” about the decision.

The Board of Education will meet again in a Special Called meeting on March 19 to discuss their next steps.