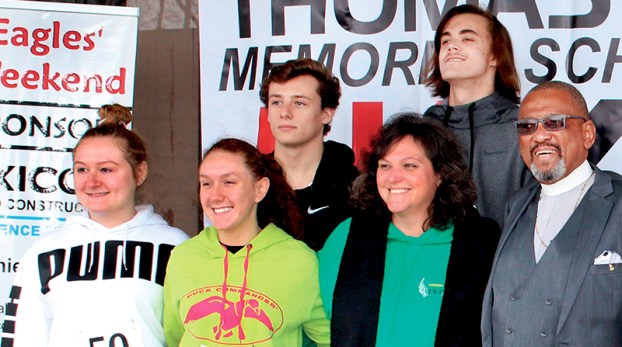 LASKER – It was a breezy, chilly Saturday morning most would prefer to spend in bed. But instead, a crowd of people of all ages came out to Northeast Academy in Lasker to participate in the annual Thomas Piper Memorial 5K Race.

This would have been Thomas’ senior year at Northeast Academy. The annual event was named in honor of the student who tragically lost his life in an auto accident near Milwaukee in Northampton County in May 2014. Thomas was 13 years old at the time.

Since his passing, the money raised from the race has been used to fund college scholarships given each year in memory of Thomas.

This year, Latoya Joyner, a representative from Carolina Donor Services, was in attendance to bring more awareness to the need for organ and tissue donors. Don Roberts, a pastor from Havelock, also made the trip to Lasker to speak after the race. Roberts received two lifesaving organ transplants—a liver and kidneys—from Thomas.

“We’ve tried this before, having one of the recipients of an organ transplant from Thomas here at the 5K, but it was so emotional on us,” said Stacey Sexton, Thomas’ mother.

The two families, however, connected on Saturday morning, sharing memories of Thomas. 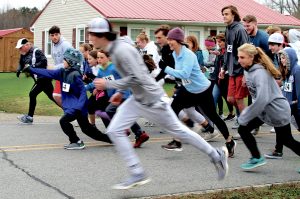 Participants take off at the start of the Thomas Piper Memorial 5K Race at Northeast Academy on Saturday morning. The funds from the race are used to fund college scholarships each year. Staff Photo by Holly Taylor

Before the race began, Roberts provided the invocation prayer, giving thanks for Thomas’ family and friends and praying for the safety of the runners. Then the crowd set off, some running at full sprint, others taking their time. A few mothers pushed their young children in strollers as they jogged along the route, and a couple racers even brought their dogs to accompany them.

Several non-participants waited at the finish line to cheer on runners as they completed the race.

Before medals were handed out to the fastest racers, both Joyner and Roberts spoke about the importance of organ and tissue donation.

“It is an honor to be here, and I would not have missed this for anything in the world,” Roberts said who said he’d like to continue coming back each year. “I thank God for Ms. Stacey and Thomas’ father and the whole family because I am a recipient of Thomas’ liver and kidneys. So even though he is not with us, he is with us in me.”

“You can save lives,” he continued. “Being an organ donor is very important. It does pay off and it is worthwhile. You can live a long life and still be an organ donor.”

Roberts said he too has been a registered organ donor since the time he enlisted in the military.

Joyner, who serves as the Community Relations Coordinator for the eastern part of North Carolina, provided more information about how donors can register and how that benefits others.

“We serve over 100 hospitals across North Carolina and four transplant centers,” she explained, noting Carolina Donor Services covers 77 counties in the state.

According to Joyner’s statistics, over 113,000 people in the United States are on the waitlist for lifesaving transplants. In North Carolina, that number is a little over 3,000 individuals.

“Every 10 minutes, a new name is added to the waitlist,” she said. “And sadly, on average, 20 people die each day because the transplant or lifesaving organ they need didn’t come in time.”

One donor, Joyner said, can save up to eight lives with organ transplants including heart, lungs, kidney, liver, pancreas, or intestines. Tissue donation from one person, which includes corneas, tendons, heart valves, veins, skin, and bones, can help over 50 people.

People who wish to become organ and tissue donors have different ways they can register. One of the most common ways is at the DMV when people get their driver’s license.

“What a lot of individuals don’t know is the heart on the driver’s license is for organ and eye donation. It does not include tissue,” Joyner emphasized.

The Donor Service representative brought forms with her so that people who wished to become donors could sign up in person that day. It is also possible, she said, to register as a donor online at www.donatelifenc.org.

Joyner stressed the importance of discussing the topic with family members even though it’s an uncomfortable subject many people don’t want to think about.

JACKSON – The decision was not unanimous. But in the end, the school board had enough votes to accept the... read more