FRANKLIN, VA – DiAnne Hurdle Bryant of Franklin, VA died February 23 after emergency heart surgery, tightly shrouded in the arms of her daughter, Susan Bryant, who was her life’s greatest joy. 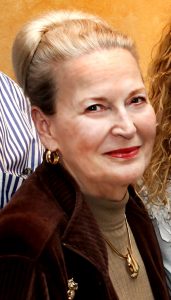 One of her last acts before surgery was mailing out Valentine’s Day cards, spreading her love until the very end as family and friends read them, unaware she was in intensive care.

Even in her later years, her pristine beauty still captivated everyone, lured by the intrigue of her trademark elegant blond hair bun. Her hallmark class and grace left lasting impressions everywhere. Her fashion signatures were sparkly brooches on sharp blazers and red outfits — the same color of the cardinals that she fed in her 1-acre yard on Sandy Ridge Road, where she constantly gardened with her nourishing touch.

A native of Belvidere, NC, she was the daughter of Richard Ephraim and Mildred Hollowell Hurdle. She grew up in Hobbsville, NC and attended Hobbsville Grammar School, Sunbury High School, and Paul D. Camp Community College.

Mrs. Bryant worked as a secretary for the Suffolk city attorney and the mill manager of Union Camp Corp., and as office manager of Venture Properties before retiring in 2005.

A traditionalist, she never wavered from devoted service and loyal commitment, whether it was for her family or the community.

She volunteered at East Pavilion nursing home and as a board member of the Courtland branch library and the Franklin Music Club.

Her passion for family history fueled infinite hours of researching the Bryant genealogy. She harnessed her enthusiasm for preservation of historic properties by serving as membership committee chairman of The Murfreesboro Historical Association, where donations can be made in her name.

Mrs. Bryant’s legacy of elegance, intelligence, curiosity, Southern civility, and talent for writing lives on in her daughter, particularly the lost art of charming handwritten cards. She encouraged Susan to reap all the achievements she dreamed for both of them.