WOODLAND – An unattended wood heater is suspected to be the cause of a fire here Saturday night. 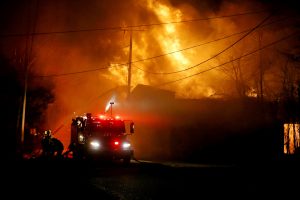 Flames and smoke fill the nighttime sky over Woodland at a fire on Saturday that caused severe damage to a warehouse on Oak Street. Photo by Derrick Wilson

Woodland Fire Chief Chris Collier said the call came in from dispatch at 7:55 p.m. about a fire at a warehouse on Oak Street at the intersection of Cottonwood Street. The volunteer fire department was on the scene two minutes later.

“We responded with two engines and a tanker and 13 firefighters,” Collier reported, noting the Rich Square Fire Department also responded as mutual aid, bringing two engines, one tanker, and 10 firefighters.

“We probably used about 25,000 gallons of water to contain it,” he continued.

The building was vacant when firefighters arrived, so there were no injuries. But two powerlines fell down in the process of putting out the fire, leaving many Woodland residents in the dark. Collier said Dominion Energy was on the scene about five hours to restore power.

“The warehouse was an old casket factory,” Collier stated, estimating the large building to be about 50 to 60 years old.

The building had recently been sold, and Collier said the new owner had been working to clean and fix up the former factory.