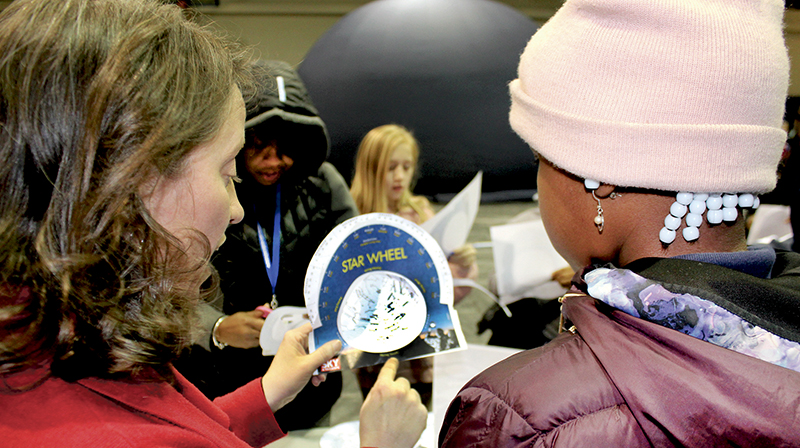 Karen Clough (left), a volunteer with North Carolina Land of Water (NCLOW), instructs a student on how to construct a paper Star Wheel for observing the night sky during Thursday’s Star Party held at Bertie Middle School. Staff Photo by Gene Motley

WINDSOR – It was billed as a ‘Star Party’, but Mother Nature didn’t quite cooperate.

The group receives funding from several sources, including Bertie County and the Town of Windsor.

Outdoors, the youngsters were going to view the panorama of the skies – best seen during the phase of a new moon – but beginning around evening time (6:30 p.m.), cloud-cover began forming across the southern part of the county, and only thickened as the night wore on.

Undaunted, ATFS had brought along a mobile Planetarium for star-gazing; and while it didn’t take the place of looking at the actual moon, nor The Milky Way, Orion, or Cereus Major, it did provide the youngsters and their parents with an education on the wonders of the night-time.

“This free event is an excellent opportunity for the public to engage with the nocturnal environment in a new way with expert guidance and observational resources,” commented retired East Carolina University research professor, Dr. Stanley Riggs, one of the night’s organizers.

“We’ve been doing these teacher-science education workshops all year,” said Riggs. “It’s part of bringing science to the students and to teach everyone what’s in your own back yard in the earth, the water, and the skies. We deal with landscapes, waterscapes, and skyscapes.” 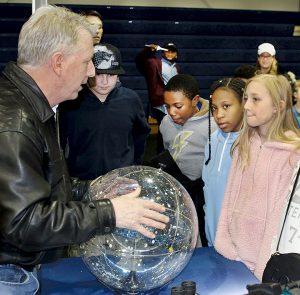 Mike Littleton, a retired physicist and astronomer, displays a transparent celestial star globe along with telescopes used for star gazing during the Star Party at Bertie Middle School. Staff Photo by Gene Motley

Science teachers from Bertie County elementary schools and Bertie Middle School were on hand with the students, and were glad it was an evening that emphasized STEM (Science, Technology, Engineering and Math).

“The greatest thing for these kids is the exposure,” said Cheryl Jefferson, a Science, Reading, and Social Studies teacher at West Bertie Elementary. “It’s also showing them that they have options in STEM professions; since kids these days want jobs where they can be successful and make money. STEM is trending nowadays and they are learning that we would all be lost without it.”

Riggs said the skies of northeastern North Carolina from the Roanoke River to the coast are the darkest on the eastern United States coast between Boston and Miami.

“There’s not a whole lot of night sky left in the world because we have lights everywhere,” he observed. “One part of this is educating people about ‘light pollution’, and how we can keep our dark skies.”

“The goal of these exhibits is to teach kids to expand their knowledge in some of the under-represented areas of science,” she explained. “We want to also make them aware of other sciences.”

One of the evening’s most popular presentations, especially in lieu of no outdoor star-gazing, was the indoor, interactive planetarium with showings led by astronomer Brian Baker every half hour.

Baker studied astrophysics at Florida State University and has been teaching people of all ages about the wonders of the night sky for 11 years. He’s currently the astronomy and space science director at ATFS in Greenville. He says the group travels for outreach events within the area, making a Star Party a rare treat for the Bertie County public.

“The Star Party is usually held during a new moon, which is the optimal time to observe the night sky,” Baker said. “Unfortunately, tonight, we couldn’t. Students will see the stars like they’ve never seen them before.”

Mike Littleton, one of the members of the Coastal Studies Institute and a retired physicist and astronomer brought along several telescopes, and one other vital item for observing the night sky.

“A pair of binoculars,” he joked, holding them aloft. “If you ever tire of looking at stars, moons, and constellations, you can always use them for bird-watching. But, seriously, they’re a great and inexpensive nighttime tool.”

“Folks can use our telescopes or even bring their own to receive guidance on how to use them, which can sometimes be intimidating,” he noted.

Other children’s activities and exhibits included making a Star Wheel, a paper device the children could take home and later use to observe the cosmos and read the night skies when the clouds are more cooperative.

“I never taught high school, or elementary school for that matter,” conceded Riggs. “But this is all a part of what eastern North Carolina needs. We have such a wealth of natural and cultural resources here and we need to learn how to understand them, and then use them creatively to produce jobs. Ecotourism is a future that can hopefully make Bertie County so much richer and so much better.”