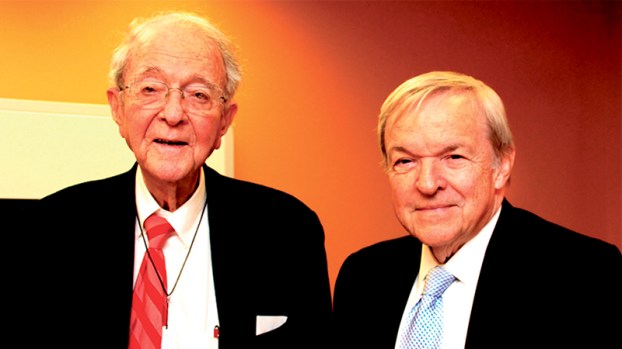 Dr. John Stanley (left) poses with retired pharmacist Carl Taylor prior to the two taking part in a filming of a video last year used as a historical tribute to Vidant Roanoke-Chowan Hospital’s 70th anniversary. File Photo by Cal Bryant

WOODLAND – He was always on call.

Over the course of his 64 years of practicing medicine, Dr. John H. Stanley took care of those who showed up at the door of his tiny office on Spruce Street in the heart of downtown Woodland. Or, if the need arose, he would administer his masterful skills as a country doctor at the home of a patient; or in their hospital room….wherever, whenever, day, night, weekends, and holidays; if you needed “Doc” Stanley, he was there.

On Saturday, March 2, less than two months after celebrating his 92nd birthday, Dr. Stanley’s services were needed in Heaven.

“John Stanley was an icon in medicine,” said Dr. Charles Sawyer, a man, like Stanley, who understands all about longevity in the medical field, hanging out his “shingle” in Ahoskie in 1965. “He was the dean of doctors here in our little part of the world and was extremely talented in his medical practice.”

Sawyer referenced his medical colleague as “a wonderful and bright southern gentleman; so full of love for his fellow man.”

“He possessed many talents beyond medicine, to include building things….what he could do with his hands was so amazing,” Dr. Sawyer continued. “He even built his own casket. He made me a beautiful stool that sits here in my office at home today.

“I loved him like a brother, and will miss him dearly,” Sawyer said.

Among Stanley’s close friends was Woodland native Dan Joyner. He said “Doc’s” medical talents were amazing, but his life also included numerous occasions when he was able to enjoy other adventures.

“For the past 30 years, several Woodland Volunteer firemen would go fishing for a few days every October in Kitty Hawk,” Joyner fondly recalled. “We all looked forward to those long weekends of fishing, drinking beer, and sitting on the front porch of the cottage reminiscing about past fishing trips and life in Woodland. Dr. Stanley always kept us amused with his jokes and stories. 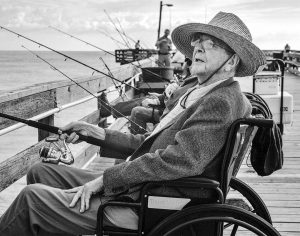 Every October for 30 years, Dr. John Stanley joined with a few of his fellow members of the Woodland Volunteer Fire Department for a fishing trip to Kitty Hawk. This photo was taken this past October. Photo by Dan Joyner

“Most years we would catch enough spot, speckled sea trout and sea mullet to cook for supper and have enough to take home,” Joyner added. “Eddie Morris and Al Morris were our resident fishing gurus who made sure we had the right bait and used the best techniques to catch fish. After cleaning our catch of the day we would sit on the front porch or sit around the TV to view the weather reports in order to plan our activities for the next day.”

“On this occasion I went to bed early, before 10 pm as I was completely exhausted and immediately fell asleep,” Joyner noted. “Several hours later someone entered the bedroom and placed something on my bed. It was a stray cat that Doc had befriended earlier in the day.

“It was completely dark in the bedroom and the startled cat landed on my head before springing to the window sill above my head,” he continued. “I was terrified as I fumbled to find the light switch. After turning on the lights I saw the cat and heard seven grown men in the narrow hallway howling with uncontrolled laughter. The first face I saw was Doc with tears of laughter running down his cheeks. Although he repeatedly denied being the perpetrator, I knew better.

“I miss you Doc. I will forever cherish the many memories,” Joyner added.

Inside the tight-knit Woodland community – where Stanley not only served his patients, but was also a member of the Fire Department for 44 years and was the town’s Mayor for 30 years – others weighed in on what this legendary man meant to them.

“Dr. Stanley came to Woodland in 1955 and he has served this town and tried to help this town grow,” said Barbara Outland, owner of the Grapevine Café on Main Street. “And as far as myself, he has been my doctor for probably 55 years. He delivered my son, Scott. Next month will be 47 years ago he delivered him. So we go back a long ways together.”

Donielle McDermott, who serves Woodland as its Town Clerk, said her family moved there in 1984.

“So, right away, he became our family doctor,” she said. “I have memories of him coming to my house when I was a little girl. I would have asthma attacks and he would come, even during the night, to my house and give me shots.”

Now as the mother of three girls, McDermott placed their medical care in Stanley’s capable hands.

“The girls went to see him for a sinus infection just three weeks ago,” she remarked. “My husband’s dad was visiting one time and they were out in the shed working and he cut his finger. And he went right up to Dr. Stanley’s office and he stitched him right up. He was always there, even when he wasn’t at the office. All you had to do was contact him and he’d say ‘meet me up there.’ You don’t see that anymore.”

What’s now so sad is that this giant of a man is gone.

“We’re really going to miss him,” McDermott stressed. “It was very convenient to run up the road, go up there and see him. You didn’t have to make an appointment.”

While McDermott said she wasn’t among the babies that Stanley delivered over the years, he was there to bring a countless number of lives into the world.

“At his funeral, someone asked people to raise their hands if they were delivered by Dr. Stanley and there were a lot of hands up,” she witnessed. “He did a lot for our community. Did a lot for the fire department. He was just real good to all of us.”

Current Woodland Mayor Kenneth Manuel said these are sad days for the town.

“And not just Woodland, but the entire Northampton County community,” Manuel noted with Dr. Stanley’s passing. “He has just been so involved in so many different things and so many ways. It is just amazing.

“He’s touched the hearts and the minds of probably just about everybody in Northampton County one way or another,” the Woodland Mayor continued. “If not them directly, then definitely by a family member or someone they know close by. And he continued to practice and just didn’t stop until the Lord called him home, it’s just an amazing testament of his dedication and commitment to his community and his patients. He’s such an accomplished guy in so many ways, and a role model for a lot of people as well.”

Prior to his death, plans were already in the works for Stanley to transition over to the new Woodland Primary Care, a facility on Main Street that the Roanoke Chowan Community Health Center (RCCHC) plans to open this year. RCCHC officials announced in July of last year that the Woodland facility would be named in Stanley’s honor.

“It saddens me that the new RCCHC John H. Stanley, MD Woodland Primary Care office was not ready to open before his passing,” stated Kim Schwartz, the CEO of RCCHC. “But it gives me a sense of peace that he shared with our Chief Medical Officer, Dr. Claudia Richardson, last week that he was glad we were going to be taking care of his patients.”

Schwartz added that she spoke with Dr. Stanley two weeks ago to share with him that RCCHC was seeking a federal grant to ensure Woodland Primary Care would have a strong sustainability plan along with adding a small pharmacy to the building, which is delaying the opening until September.

“Well, that is worth the wait, Dr. Stanley told me in his great, good-natured way.”

Schwartz shared one story that perhaps sums up Stanley’s legacy as a great medical doctor.

“One day, not long ago, I was visiting him in his office working on some of the technicalities about the new Primary Care facility and he was on the phone with a former patient who lived in another state and had called to get Dr. Stanley’s opinion on a medical issue,” Schwartz recalled. “That might not have been so unusual, but this former patient has two sons who are doctors and she valued Dr. Stanley’s perspective over her sons. I suspect in his 64 years of practice those kinds of phone calls were the norm for him.

“I believe Dr. Stanley’s major longstanding most impactful contribution is the development of a comprehensive mental health care program for Eastern North Carolina. He was so far ahead of his time in the practice of managing the medical and mental health conditions together. The legacy that Dr. Stanley has left us all is everlasting,” Schwartz closed.

Judy Bruno, President of Vidant Roanoke-Chowan Hospital, hailed Stanley as a medical visionary and a man devoted to patient care in excess of 60 years.

“He served on the hospital’s medical staff and helped to start the first community ‘mental health’ center in the Roanoke-Chowan area,” Bruno said. “This led to our hospital opening an adult behavioral health center (formerly called Northside) and expanding the outpatient behavioral health services that we provide today.”

Last year, Dr. Stanley was interviewed as part of a video on the history of Vidant RCH as part of the hospital’s 70th anniversary.

“Because he has served as a physician in the Roanoke-Chowan area since 1955, Dr. Stanley had many ‘hospital memories’ to share. His daughter, Dixie Harrell, served on our Directors’ Council for six years. Dr. Stanley will be greatly missed by our physicians, nurses, and team members,” Bruno said.

Stanley, a native of South Carolina who moved to Woodland to open his medical practice in 1955 and was still actively working until his death, was buried on Monday in the Woodland Cemetery.

WOODLAND – Another year has come and gone without any clues to solve a mystery than spans over one-half century.... read more