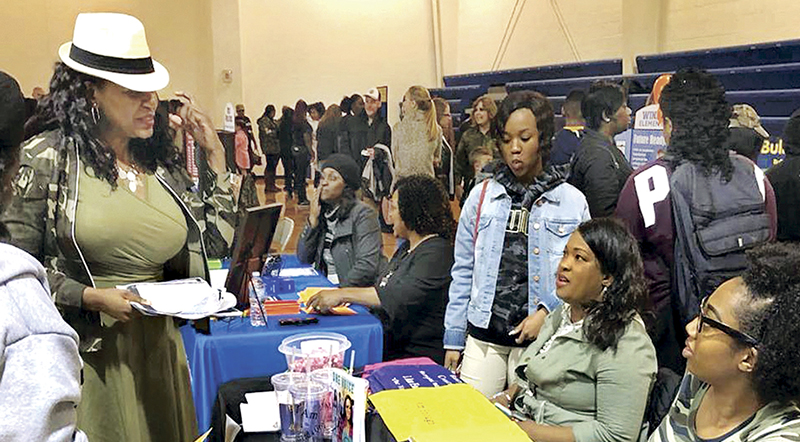 Each Bertie County school sponsored a table to help students, parents, and staff in identifying bullying with videos, brochures, and other handouts. Photo courtesy of Bertie County Schools

That’s because Bertie County Schools has declared “war” on bullying.

Bertie Middle School in Windsor served as the host location for the first ever free community-wide event representing BCS’ commitment to working with students, parents, staff and community partners to say “No” to bullying.

Sylvia Walton, a school counselor for the district’s Aulander and Colerain Elementary schools, served as MC for the event. Walton is also a newly published author on the subject of bullying with her recent book on the subject, “One Voice”. A novel about young girl who eventually learns that by not keeping quiet and using her voice, she has the power to change the world and stomp out bullying in our schools and communities.

Next came a performance by the “Unspoken Praise Team” from Aulander Elementary School, under the direction of kindergarten teacher Marlina Perry. They expressed themselves through dance and praise music.

Kiedan Perry, a fourth grade student from Colerain Elementary School, read poetry for those in attendance. With great emotion, she recited Maya Angelou’s “Still I Rise.”

Sgt. Jimmy Barmer, of Vidant Police at Vidant Bertie and Vidant Chowan Hospitals, and who is also the Town of Aulander Police Chief, delivered a message about his personal experience with bullying as a youth. He said you can overcome such a damaging experience by seeking out proper school, faith-based, and community resources.

Barmer used himself as a role model: someone who once was bullied, who overcame, and who went on to make something great out of his life.

“You don’t have to react and resort to violence,” he said. “Seek out a pastor or a teacher, and you can rise above it.”

Guest speaker for the evening was Keyana Cousin, a Bertie High School student who has a personal connection to being bullied, and who desired nothing more in life than to help and serve others. She spoke about feelings and how to handle them when they are overwhelming, and she inspired others to be upstanders instead of bystanders.

Following her remarks, everyone in attendance stood and took an oath to “Stand Against Bullying!”

The videos were posted on the Bertie Schools’ Facebook page and votes were cast via Google over three days. Vickie Watford, School Social Worker, announced the winners.

They were: Windsor Elementary, Bertie Middle School 8th graders, and Bertie Early College High School. Each winner received a trophy, and Lasca’s Italian Restaurant of Windsor donated two extra-large pizzas for each of the teams that made a winning video.

“But every school was a winner,” insisted Watford, “because every school took action, and took a stand against bullying.”

The goal is to establish broad supports, both in and out of school, and to support students with a communitywide commitment to ‘Wage War against Bullying.’

“This event was a direct extension of the labors of Bertie’s School Safety Committee designed to develop comprehensive plans and programs to implement in the schools to keep students and staff safe at all times,” noted Edmonds.

Following the formal program, those in attendance were released to visit tables, sponsored by each school, as well as community partners who can help with identifying bullying, helping parents and staff know how to respond to it, and helping students to learn how to stand up to it safely.

Jordan Harris of the Raleigh-based A.A. Poe Center for Health Education NC, an organization that aims to educate people on healthy living, offered educational programming specifically on the topic of bullying, and this group came from the capital specifically to sponsor an information table.

“The Poe Center is very honored and excited to be a part of such a great event and for such a worthy cause,” said Harris.