DURHAM, NC – Almost 88 years ago, in the small NE North Carolina town of Murfreesboro, Irene and David Collin Barnes had a baby boy, their third child, Alexander Hall Barnes. He grew to be the apple of his mother’s eye and had a happy childhood wandering the woods, farmland and river banks of the Chowan River. Alex got his green thumb from his mother, who would later in his life always send him home with a car full of cuttings and young plants. 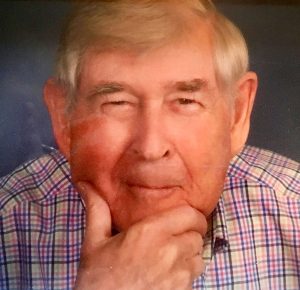 Alex loved playing basketball and was pleased to hone his skills during his junior year in Alexandria, Virginia at Episcopal High School. He then went off to college at the University of North Carolina in Chapel Hill, continuing a family tradition of Tar Heel alumni and fans. His father, David Collin Barnes, who Alex admired immensely, was a 4th generation lawyer. Following another family tradition, after three years in college Alex took advantage of a program that enabled him to start law school at UNC before graduating from college.

After graduating from law school, JD with Honors, he joined the United States Air Force as a lawyer in the JAG core and happily moved to Miami where he and his first wife started their family with the birth of his daughter Julie. After a couple of years in Florida they returned to Durham, North Carolina in 1960 where the family grew with the birth of his son Hall.

Alex joined the Spears law firm and eventually became a partner in the firm of Spears, Barnes and Baker, practicing civil law in downtown Durham. He was a natural born trial attorney and enjoyed his clients and days in court. He would regale his family at the dinner table with the foibles of clients, court and witnesses (always unnamed of course).

Although he loved the law and work, his real love was his family. He was almost always home by 6 pm for a little work in the garden followed by dinner with the family. He instilled respect for all people, hard work and a love of life in his children.

After raising his biological children he lovingly instilled the same virtues of hard work, respect for all people and love of life in his step-sons, Chandler and Trent.

Alex’s other favorite past time was heading to the beach at Nags Head. He worked in the Post Office there during his summers in college and returned every summer to his wife’s family’s historic cottage there, creating a matching love for the ocean and beach in his children. He loved to swim and push his kids through the water. Later in life, he and his beloved second wife, Sharon, bought a place in Emerald Isle where they continued to enjoy the beach and fishing.

He and Sharon spent many years travelling and working in the yard and enjoying their retirements together. Alex particularly enjoyed feeding the birds, geese and deer in their backyard. He doted on his cats.

Alex died early on a rainy February morning after visits by all of his close family and some of his friends. As he was a man of strong faith we are comforted by the belief that he is now reunited with his treasured son Hall, his parents and other loved ones.

Many thanks to the caring staff at Seasons at Southpoint who have provided faithful support and compassionate care over the past months.

Also, thanks to Duke HomeCare and Hospice, Dr. Jason Webb, for providing palliative care and guidance in making difficult decisions, and Betty Nickens and Rosemary Seve, home caregivers who enabled Alex to stay home as long as possible.

Donations in Alex’ name may be made to St. Philips Episcopal Church, Duke HomeCare and Hospice, the Goathouse Refuge in Pittsboro or the charity of your choice.