AHOSKIE – It was the only points she made the entire game, but they were huge. 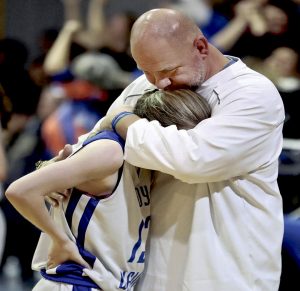 Trinity Christian School’s Lauren Weese rained in an off-balance three point shot with a little over a minute remaining in the championship game of the NC Christian Athletic Association basketball tournament, sinking the hopes of hometown Ahoskie Christian 37-34, as a steady weekend rain fell outside.

Though they were defending champs, Trinity came in as the four-seed out of the NCCAA’s South Division in the NCCAA, but Weese, the only senior on the squad, gave her team their first lead of the game, 33-32, with her trey. Ahoskie’s Cameron Wallace then made one of two free throws to re-take the lead, but with 18 seconds left, Faith Hedgepeth was fouled on a drive for Trinity. She only made 1-of-2, but after Ahoskie failed to get a shot off with time winding down, Leigh-Ann Jordan collected a garbage basket at the buzzer, crushing the hearts of the Ahoskie faithful.

If only raindrops could hide the teardrops.

It was a game where Ahoskie – who’d earlier upset top-seed Bethel Assembly on Friday – seemed in command with a 14-point lead midway through the third quarter.

“Turnovers,” sighed ACS coach Kelly Perry afterward. “You can’t turn the ball over and not expect the other team to capitalize. Then they were able to ice it at the free-throw line.”

Ahoskie led the tightly played title contest, squeaking out a three-point lead after the first quarter, 8-5. In the second quarter, the Lady Warriors played like it was going to be a rout, scoring 13 big points to lead it 21-10 at halftime. Wallace, who scored just 10 in the BACA win – all in the second half – kept her team on fire as Ahoskie built a 26-12 lead in the third quarter.

Then, they couldn’t seem to find the handle.

The Warriors became turnover prone, and Trinity – who ramped up their own pressure defense, and did so without reaching and picking up easy fouls – suddenly found the momentum. Gradually they worked their way back into it, and were only trailing by five 27-22 at the end of the third quarter.

The final stanza became a game of keep-away for Ahoskie, but soon errant passes either fall into the Tigers’ paws or were fumbled hopelessly out of bounds. An ACS shooting touch began to suddenly vanish.

“It kind of got away from us,” recalled Perry.

Wallace scored on a short jumper, but that was the only field goal for Ahoskie in the quarter. The rest of only seven points they managed in the frame came at the free throw line.

Still, they were able to keep the Tigers at bay until the final three minutes. Jordan – who would lead all scorers with 19 – scored eight in a three-minute span and the 14-point lead had dwindled down to five, then three, then it came down to just a two-point lead, 31-29, before Weese’s heart-stopping bomb seemed to let the air out of the Ahoskie faithful.

“I’m still very proud of my team,” said Perry. “They left it all out on the floor when they had to, and I can’t ask any more of them than that.

“We didn’t play as hard in the first half,” said Trinity coach Joey Whitehurst. “I reminded the girls we were defending champs and they picked it up in the second. Winning two in a row sure feels good.”

Ahoskie finishes an outstanding season at 17-7, reaching heights that perhaps no one expected.

“We’re young,” cautioned Perry, whose squad boasts no seniors and just one junior returning for 2020. “We just have to work hard to get back here.”