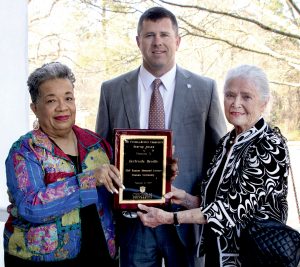 Following her collegiate education and marriage, this Salem College graduate settled down in Murfreesboro with husband, Guy, who practiced law with his uncle. Gertrude taught at the local high school. From the beginning, the couple enjoyed the quaint college town and its many historic sites.

Revelle has a genuine interest in the history of the town and making it available to the public. After World War II, citizens founded the Murfreesboro Historical Association to help revitalize the town. She was eager to become involved as a docent. Revelle also helped clean the John Wheeler house, where the need for period furniture was noticed. She collaborated with Jack and Margaret Tyler, who were known for their involvement in the restoration of the Hope Plantation, to secure furniture, some of which was donated by Wheeler relatives and other citizens.

With authenticity as a top priority, the Revelles even flew to New York to have original wallpaper replicated by Brunswick & Fils. Gertrude kept records of furniture that was purchased and donated as part of her work on the Collections Committee.

As part of the Publications Committee, she partnered with many authors who agreed to write or gave permission to have their works published and sold with proceeds funding reprints of the works and new books. Revelle and the Membership Committee also worked with Ben Sutton, Jr. to have a $10,000 Matching Grant created for the town. The funds helped preserve buildings owned by the Historical Association.

In addition to her work with the Historical Association and preserving the history of the Town of Murfreesboro, Revelle was an integral partner in starting a family-care home for family members and neighbors who needed extra care in their senior years.

Revelle’s dedication and commitment to Murfreesboro and its citizens is evident through her many involvements. She believes when the citizens of Murfreesboro pull together much can be accomplished.